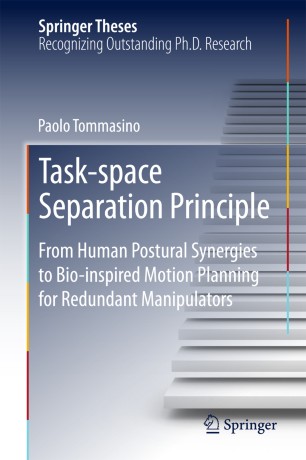 This book addresses two fundamental issues of motor control for both humans and robots: kinematic redundancy and the posture/movement problem. It blends traditional robotic constrained-optimal approaches with neuroscientific and evidence-based principles, proposing a “Task-space Separation Principle,” a novel scheme for planning both posture and movement in redundant manipulators. The proposed framework is first tested in simulation and then compared with experimental motor strategies displayed by humans during redundant pointing tasks. The book also shows how this model builds on and expands traditional formulations such as the Passive Motion Paradigm and the Equilibrium Point Theory. Lastly, breaking with the neuroscientific tradition of planar movements and linear(ized) kinematics, the theoretical formulation and experimental scenarios are set in the nonlinear space of 3D rotations which are essential for wrist motions, a somewhat neglected area despite its importance in daily tasks.