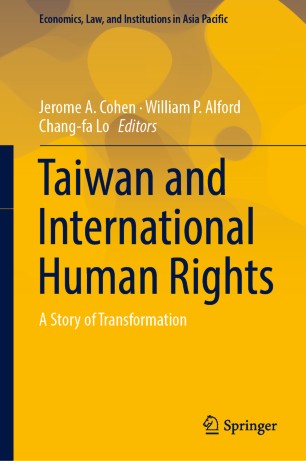 A Story of Transformation

Part of the Economics, Law, and Institutions in Asia Pacific book series (ELIAP)

This book tells a story of Taiwan’s transformation from an authoritarian regime to a democratic system where human rights are protected as required by international human rights treaties. There were difficult times for human rights protection during the martial law era; however, there has also been remarkable transformation progress in human rights protection thereafter. The book reflects the transformation in Taiwan and elaborates whether or not it is facilitated or hampered by its Confucian tradition. There are a number of institutional arrangements, including the Constitutional Court, the Control Yuan, and the yet-to-be-created National Human Rights Commission, which could play or have already played certain key roles in human rights protections. Taiwan’s voluntarily acceptance of human rights treaties through its implementation legislation and through the Constitutional Court’s introduction of such treaties into its constitutional interpretation are also fully expounded in the book. Taiwan’s NGOs are very active and have played critical roles in enhancing human rights practices. In the areas of civil and political rights, difficult human rights issues concerning the death penalty remain unresolved. But regarding the rights and freedoms in the spheres of personal liberty, expression, privacy, and fair trial (including lay participation in criminal trials), there are in-depth discussions on the respective developments in Taiwan that readers will find interesting. In the areas of economic, social, and cultural rights, the focuses of the book are on the achievements as well as the problems in the realization of the rights to health, a clean environment, adequate housing, and food. The protections of vulnerable groups, including indigenous people, women, LGBT (lesbian, gay, bisexual, and transgender) individuals, the disabled, and foreigners in Taiwan, are also the areas where Taiwan has made recognizable achievements, but still encounters problems. The comprehensive coverage of this book should be able to give readers a well-rounded picture of Taiwan’s human rights performance. Readers will find appealing the story of the effort to achieve high standards of human rights protection in a jurisdiction barred from joining international human rights conventions.