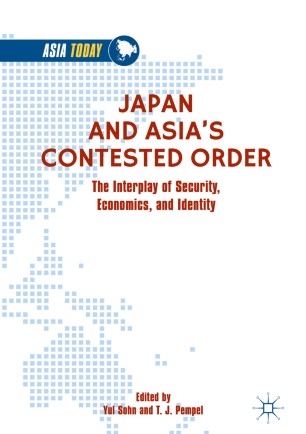 The Interplay of Security, Economics, and Identity

This book brings together up-to-date research from prominent international scholars in a collaborative exploration of the Japan’s efforts to shape Asia’s rapidly shifting regional order. Pulled between an increasingly inward-looking America whose security support remains critical and a rising and more militarily assertive China with whom Japan retains deep economic interdependence, Japanese leaders are consistently maneuvering to ensure the country’s regional interests. Nuclear and missile threats from North Korea and historically problematic relations with South Korea further complicate Japanese endeavors. So too do the shifting winds of Japanese domestic politics, economics and identity. The authors weave these complex threads together to offer a nuanced portrait of both Japan and the region. Scholars, observers of politics, and policymakers will find this a timely and useful collection.
T. J. Pempel, with a Ph.D. from Columbia University, is Jack M. Forcey Professor of Political Science in U.C. Berkeley's Department of Political Science which he joined in July 2001. He served as director of the Institute of East Asian Studies from 2002 until 2006.
Yul Sohn, with a Ph.D. from the University of Chicago in Political Science, is Professor of International Studies in Yonsei University's Graduate School of International Studies. He is also President of the East Asia Institute, a premier foreign policy think-tank in South Korea.