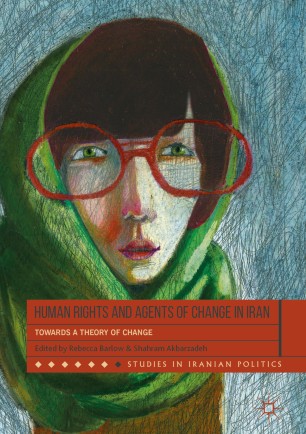 Human Rights and Agents of Change in Iran

Towards a Theory of Change

Part of the Studies in Iranian Politics book series (STIRPO)

This volume extends debates on the interaction between universal human rights and the
political experiences of Iranians, through a conceptual analysis of ‘theories of change’. It
assesses the practical processes by which individuals, organizations and movements can reform
or impact the structural, theological, and political challenges faced in the Iranian context.
Contributors to this volume investigate how structures, institutions, and agents in Iran
maneuver for influence and power at the state level, through the law, in international corridors,
at the grassroots, and by implementing multiple and complex methods. The chapters provide
distinct but interrelated analysis of key drivers of change in Iran. A number of those operate
primarily through top-down approaches, such as the political reform movement, lawyers
pursuing legislative change, and international human rights monitoring bodies. Others take
a bottom-up approach, including local movements and campaigns such as the women’s
movement, the student movement, and ethnic minority groups.
Rebecca Barlow is a Senior Research Fellow at the Alfred Deakin Institute for Citizenship
and Globalisation, Deakin University, Australia. Her research focuses on the Iranian women’s
movement and the politics of human rights in the Islamic Republic of Iran. Dr. Barlow is
the author of Universal Women’s Human Rights and the Muslim Question: Iran’s One Million
Signatures Campaign (2012). She has worked for the Victorian Local Governance Association to
produce a toolkit to implement the ‘Victorian Charter of Human Rights and Responsibilities’.
She has also interned and acted as Consultant for the United Nations Population Fund (UNFPA)
Gender, Human Rights and Culture Branch, working on the United Nations Global Forum of
Faith-based Organisations in Population and Development (2008).
Shahram Akbarzadeh is Professor of Middle East & Central Asian Politics at the Alfred Deakin
Institute for Citizenship and Globalisation, Deakin University, Australia. Prof. Akbarzadeh is
author of Uzbekistan and the United States (2005), US Foreign Policy in the Middle East (2008
with Kylie Baxter) and Muslim Active Citizenship in the West (2014 with Mario Peucker). He is the
founding Editor of the Islamic Studies Series and a regular public commentator.