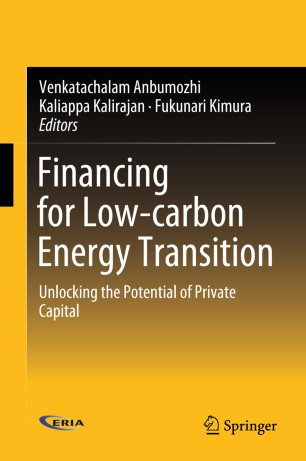 Unlocking the Potential of Private Capital

This book is the first comprehensive assessment of the state of low-carbon investments in Asia, analyzing the rationales, mandates and public–private financing activities. Based on the experiences of several regional initiatives wherein public financing is catalyzing private investments in low-carbon infrastructure, this book proposes a framework that can be used as a tool to identify factors that influence private investment decisions and policy instruments that can scale up the private capital.
Placing the Asian economies onto a low-carbon development pathway requires an unprecedented shift in investments. This book addresses this situation by asking questions such as
• What is the central role of private finance in achieving the Paris Agreement targets?
• What key policy levers and risk mitigation can governments use in an effort to unlock the potentials of private capital?
• How can regionally coordinated actions hold significant promise for scaling up private investments?

Venkatachalam Anbumozhi is a Senior Economist at the Economic Research Institute for ASEAN and East Asia (ERIA), Indonesia. He has published widely on natural resource management, climate-friendly infrastructure design, and private sector participation in green growth. He was invited as a member of the APEC Expert Panel on Green Climate Finance and the ASEAN Panel for promoting climate-resilient growth. He has taught courses on resource management, international cooperation, and development finance.
Kaliappa Kalirajan is a Professor at the Crawford School of Public Policy at the Australian National University, Australia. He is also a Visiting Professor at the Madras School of Economics, India and International University of Japan, Japan. His major areas of interest include macroeconomic and trade policies, sources of growth, regional cooperation in low-carbon energy systems, and technology issues in emerging Asian countries. He has released 150 publications in those areas in refereed academic and policy journals, and has authored and edited 15 books.
Fukunari Kimura has been a Professor at the Faculty of Economics, Keio University, Tokyo, Japan since 2000 and Chief Economist at the Economic Research Institute for ASEAN and East Asia (ERIA) since 2008. His major research interest is in international trade and development economics. In particular, he has recently been active in writing on international production networks and economic integration in East Asia.