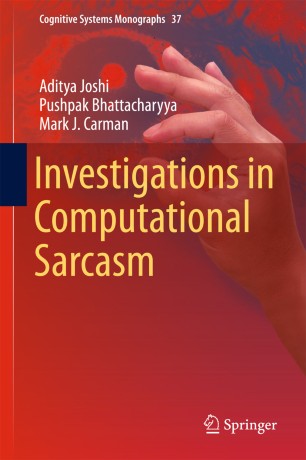 This book describes the authors’ investigations of computational sarcasm based on the notion of incongruity. In addition, it provides a holistic view of past work in computational sarcasm and the challenges and opportunities that lie ahead. Sarcastic text is a peculiar form of sentiment expression and computational sarcasm refers to computational techniques that process sarcastic text. To first understand the phenomenon of sarcasm, three studies are conducted: (a) how is sarcasm annotation impacted when done by non-native annotators? (b) How is sarcasm annotation impacted when the task is to distinguish between sarcasm and irony? And (c) can targets of sarcasm be identified by humans and computers. Following these studies, the book proposes approaches for two research problems: sarcasm detection and sarcasm generation. To detect sarcasm, incongruity is captured in two ways: ‘intra-textual incongruity’ where the authors look at incongruity within the text to be classified (i.e., target text) and ‘context incongruity’ where the authors incorporate information outside the target text. These approaches use machine-learning techniques such as classifiers, topic models, sequence labelling, and word embeddings. These approaches operate at multiple levels: (a) sentiment incongruity (based on sentiment mixtures), (b) semantic incongruity (based on word embedding distance), (c) language model incongruity (based on unexpected language model), (d) author’s historical context (based on past text by the author), and (e) conversational context (based on cues from the conversation). In the second part of the book, the authors present the first known technique for sarcasm generation, which uses a template-based approach to generate a sarcastic response to user input. This book will prove to be a valuable resource for researchers working on sentiment analysis, especially as applied to automation in social media.