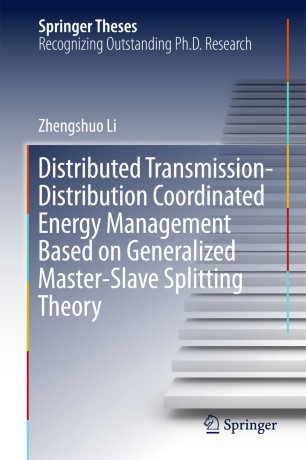 To ensure the security and economy of future power system operation in the context of a high degree of renewable energy penetration, this thesis proposes a new distributed algorithm called generalized master-slave-splitting (G-MSS) theory and a new transmission-distribution coordinated energy management (TDCEM) method that is based on the G-MSS theory.

The thesis studies the mathematical properties of the G-MSS theory in detail. Based on the G-MSS theory, a distributed TDCEM method – which involves distributed security analysis, distributed voltage stability analysis, distributed economic dispatch and distributed optimal power flow for an integrated transmission-distribution system – is then developed for the first time. The thesis demonstrates that the proposed TDCEM method significantly contributes to more reliable and optimal operation in power systems. The book will benefit researchers, scientists and engineers in the field of power system operation and optimization.