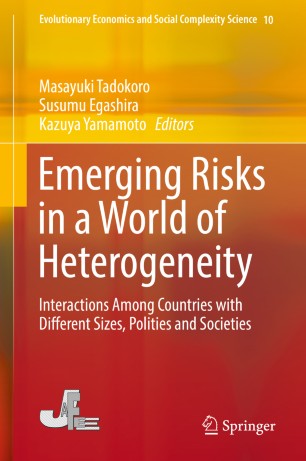 Emerging Risks in a World of Heterogeneity

Interactions Among Countries with Different Sizes, Polities and Societies

This uniquely interdisciplinary volume analyzes the challenges posed by the heterogeneity of the world where radically different players are crammed into increasingly limited political, commercial, social, and ecological space. The rapid rise of Communist Party-ruled China is posing serious challenges to the postwar politico-economic architecture dominated by the United States. Russia, once expected to become a partner of the liberal Western international order, has started behaving in an increasingly unilateral fashion. The developing world is more characterized by failed governance rather than convergence to liberal democracies as was hoped by many Western authors. Given links provided by low-cost carriers, the Internet, and trade and investment, we simply cannot shield ourselves from influences, whether benign or malign, from neighbors on this planet.
The authors, including political scientists, economists, social physicists, and experts on complexity theory and informatics, examine how interactions among actors with different properties can cause problems, and they analyze risks resulting from the interactions. While employing a variety of approaches to address topics such as economic interdependence among democracies and authoritarian states, the development assistance regimes, internal conflicts in developing countries, and cyber security, the whole volume presents a clear overview of challenges and risks the world is facing. This work makes a valuable contribution to students of social sciences as well as to practitioners interested in the emerging global order.