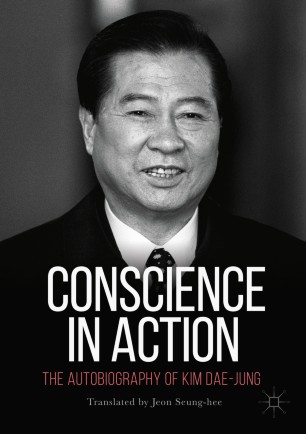 The Autobiography of Kim Dae-jung

This book is an English translation of the authoritative autobiography by the late South Korean President Kim Dae-jung. The 2000 Nobel Peace Prize winner, often called the Asian Nelson Mandela, is best known for his tolerant and innovative “Sunshine Policy” towards North Korea.
Written in the five years between the end of his presidency and his death in 2009, this book offers a poignant first-hand account of Korea’s turbulent modern history. It spans the pivotal time span between the Japanese colonial period (1910-1945) and reconciliation in the Korean Peninsula (2000-2009). In between are insightful insider descriptions of everything from wars and dictatorships to the hopeful period of economic recovery, blooming democracy, peace, and reconciliation.
Conscience in Action serves as an intimate record of the Korean people’s persistent and heroic struggle for democracy and peace. It is also an inspiring story of an extraordinary individual whose formidable perseverance and selfless dedication to the values he believed in led him to triumph despite more than four decades of extreme persecution.