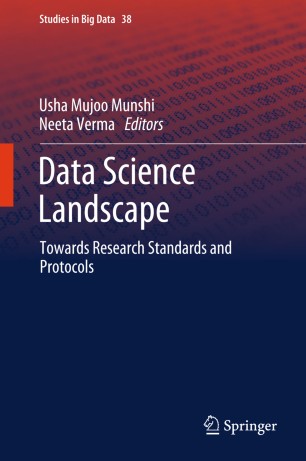 Towards Research Standards and Protocols

The edited volume deals with different contours of data science with special reference to data management for the research innovation landscape. The data is becoming pervasive in all spheres of human, economic and development activity. In this context, it is important to take stock of what is being done in the data management area and begin to prioritize, consider and formulate adoption of a formal data management system including citation protocols for use by research communities in different disciplines and also address various technical research issues. The volume, thus, focuses on some of these issues drawing typical examples from various domains.

The idea of this work germinated from the two day workshop on “Big and Open Data – Evolving Data Science Standards and Citation Attribution Practices”, an international workshop, led by the ICSU-CODATA and attended by over 300 domain experts. The Workshop focused on two priority areas (i) Big and Open Data: Prioritizing, Addressing and Establishing Standards and Good Practices and (ii) Big and Open Data: Data Attribution and Citation Practices. This important international event was part of a worldwide initiative led by ICSU, and the CODATA-Data Citation Task Group. In all, there are 21 chapters (with 21st Chapter addressing four different core aspects) written by eminent researchers in the field which deal with key issues of S&T, institutional, financial, sustainability, legal, IPR, data protocols, community norms and others, that need attention related to data management practices and protocols, coordinate area activities, and promote common practices and standards of the research community globally. In addition to the aspects touched above, the national / international perspectives of data and its various contours have also been portrayed through case studies in this volume.

Dr. Usha Mujoo Munshi, a Fulbright Scholar is currently with Indian Institute of Public Administration (IIPA). Prior to joining IIPA, she has served at many prestigious organizations like INSDOC (Council of Scientific & Industrial Research), New Delhi, Indian National Science Academy, New Delhi and Indian Statistical Institute, Kolkata. She has over 100 research and conference publications and a few books to her credit, besides a number of other publications. Her publication christened “Multimedia Information Extraction and Digital Heritage Preservation” brought out by World Scientific is a detailed & distinctive anthology on various facets of the research issues in the area contributed by the world experts. Her publication on “Knowledge Management for Sustainable Development” brought out by Scientific International has been released in October 2013 by the Vice President of India. Her latest publication on “Indian Higher Education – Research Landscape in the Global Context” by CBS Publishers & Distributors Pvt. Ltd. has been released in 2016.

Recipient of several national and international awards that includes Raizada Memorial Award 1994 for Young Information Scientist of the Society of Information Science (SIS); SIS Fellowship in 1999; Fulbright Scholar in 1996-97. ASSIST International Best Paper Award by ASSIST, USA in 2002. In 2009, Dr. Munshi obtained post of DEA (directeur d` etudes associe), an academic recognition given to her by Fondation Maison des sciences de l`homme, Paris, (France) and she is the first one to receive this recognition in the area of Information Science and Technology.

Dr. Munshi has organized over 50 National / International Conferences and the latest being on “Big and Open Data - Evolving Data Science Standards & Citation Attribution Practices” held on November 5-6, 2015 at INSA, New Delhi. She has substantially contributed for manpower development and organized a large number of training programmes on various themes.

She is on the editorial board of a few national / international journals in the area of Information science and technology. She has been elected as the Editorial Board Member of the world’s best and only Data Science Journal. Acting as a member of various national and international committees, she was nominated as a member for the Steering Committee of IAP (Inter Academy Panel) and Task force on Digital Resources - US National Academy of Sciences, USA and Co-Chair, Steering Committee, National Digital Preservation Programme (NDPP), GoI. She has been nominated as member international “Data Policy Committee” (a four member international committee) by CODATA (International Council for Science (ICSU)).Paris. She has been associated with meetings of the Consultative Development Committee – set up by the Department of Science and Technology (DST), Govt. of India for the Preparation of “Strategic Road Map for Data Analytics” for the Government. Dr. Munshi has been on the panel of International Scientific Programme Committee of the SciDataCon2016 of CODATA, Paris, World Data System, Japan, and Research Data Alliance. She is member Task Group/s on Data At Risk (TG-DAR), and Task Group on Data Citation (TG-DC), ICSU-CODATA. Recently she has also been nominated as the Member, National CODATA Committee by INSA.

Neeta Verma is the Director General of National Informatics Centre, the Premier ICT organization of Government of India implementing Digital India initiatives of the country.  She has been associated with the introduction of World Wide Web Services in Government way back in 1996.   She has consulted a large number of Government Departments on their Portal Development strategies.

As National Project Coordinator, she has led the Architecture, Design & Development of National Portal of India, india.gov.in a gateway to Indian Government Information & Services in Cyber Space.  She has also co-authored Guidelines for Indian Government Websites (GIGW), widely referred by Government Entities in India.

She has guided the team from concept to commission of first National Cloud for Government for electronic delivery of Citizen Services. She has led the implementation of Open Data in Government through Data Portal India, data.gov.in. She has also led the team in Design & Development of MyGov:  the largest Crowd Sourcing & Collaboration Platform of Government of India.