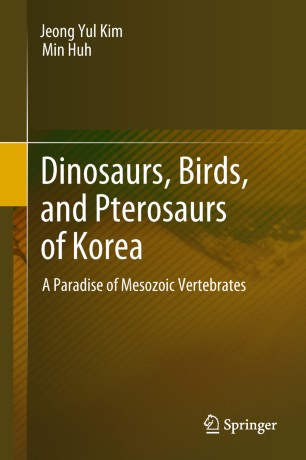 Dinosaurs, Birds, and Pterosaurs of Korea

A Paradise of Mesozoic Vertebrates

This is the first academic book about the dinosaurs, birds and pterosaurs of Korea, one of the richest and most exciting regions on earth for the study of vertebrate ichnology.  Many ichnogenera appear indigenous to Korea, and based on present evidence there is nowhere else in the world where such densities and diversity of vertebrate tracks have been reported. Many sites also reveal the highest density of bird and dinosaur track levels in the world.

The book describes the significant advances in Cretaceous vertebrate ichnology and dinosaur research made in Korea over the past twenty years. Several dinosaur fossil sites have been excavated, and unique vertebrate fossils including dinosaurs and pterosaurs have been discovered. This landslide of discovery has resulted in a proliferation of papers on vertebrate tracks and remains from the Cretaceous of South Korea and the growing recognition that as a region it reveals multiple track-rich sequences of unique quality and scientific utility. Because of the outstanding ichnological resources in this region it has been dubbed the Korean Cretaceous Dinosaur Coast (KCDC), and many sites of national and international significance have been designated as national natural monuments of Korea.

This book is written for geologists, paleontologists, ichnologists, geology and earth science students, and earth science teachers at high school, as well as the general reader interested in ancient life including the dinosaurs, birds, and pterosaurs of Korea. The goal of this book is to provide readers with a scientific understanding of Mesozoic life flourishing in the Korean Peninsula. To facilitate easy comprehension, the book contains many sketches, graphs, diagrams, photographs and tables and is supported by a comprehensive glossary.

Jeong Yul Kim is a Professor of Department of Earth Science Education in Korea National University of Education. He received his Ph.D. from Seoul National University in 1985. He was the President of the Korean Earth Science Society in 2013 and the President of the Paleontological Society of Korea in 2010-2012. He also served as a member of National Committee of the Cultural Heritage of Korea from 2005 to 2011. He served as dean of Third College in Korea National University of Education from 2012 to 2014. Kim first discovered Proterozoic stromatolites, diverse graptolites, Carboniferous corals, Pleistocene hominid footprints as well as diverse trace fossils from Korea. He received the Presidential Award in 2000 from the Korean Government, Academic Awards from the Geological Society of Korea in 2013 for his achievements in scientific researches. He appeared on KBS TV program entitled ‘Korea and Korean’ in 2004. Kim with his colleagues has published about 150 scientific papers especially on dinosaur, bird, and pterosaur ichnology and several books including Dinosaurs of Korea (2009), Megafossils of Korea (2013, Korean) and Geology of Korea (2017). His main research field is on Ichnology.

Min Huh is a Professor of faculty of Earth Systems and Environmental Sciences and a  Director of Korea Dinosaur Research Center in Chonnam National University. He also is Vice-President of Chonnam National University. He received his Ph.D. from Korea University in 1991. He was the President of the Paleontological Society of Korea from 2012 to 2017, and He is the President of the Geological Society of Korea from 2016. He serve as the responsible scientist of Korea Committee for inscribing of UNESCO World Heritage on Korean Cretaceous Dinosaur Coast (KCDC) and Mudeungsan Area for Glabal Geopark of UNESCO. He also serve as member of Conservation Committee of Unesco Jeju Global Geopark. He was a President of Organizing Committee of 11th Mesozoic Terrestrial Ecosystem Symposim in 2012. He received the Academic Awards from the Geological Society of Korea in 2007 and the Scientific Presidential Award from the Korean Government in 2011.  He has published about 100 scientific papers especially on dinosaur and pterosaur, and several books including Dinosaurs of Korea (2009), Country of Dinosaur, Korean Peninsula (2016). He was a responsible scientist for making the TV documentary film entitled ‘Dinosaur of Korea’ . His main research field is on Dinosaur.