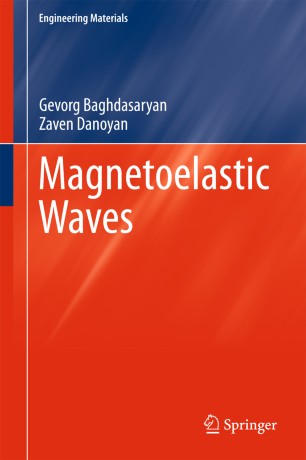 This book highlights key methods for the mathematical modeling and solution of nonstationary dynamic problems in the theory of magnetoelasticity. It also reveals the richness of physical effects caused by the interaction of electromagnetic and mechanical phenomena in both conducting non-ferromagnetic and dielectric magnetically active deformable bodies. The studies are limited to elastic bodies considering small deformations.

The book consists of two parts, the first of which derives the system of equations for describing magnetoelasticity, the surface conditions, and equations describing the perturbations behavior of non-ferromagnetic conducting media interacting with external magnetic fields. These equations are based on the main nonlinear equations and relations of mechanics and quasistatic electrodynamics of continuous media. On this basis, the book puts forward a number of qualitative and quantitative results, solving selected problems of magnetoelastic wave propagation.

In turn, the second part considers surface waves in magnetostrictive and piezomagnetic media. It obtains the system of equations, surface conditions and state equations describing the perturbations behavior in magnetoactive ferromagnetic dielectric media interacting with external magnetic fields. Lastly, the book studies the excitations and propagation of new types of surface waves and oscillations in these media, conditioned by the magnetostrictive properties of the respective medium and its interaction with an external magnetic field.