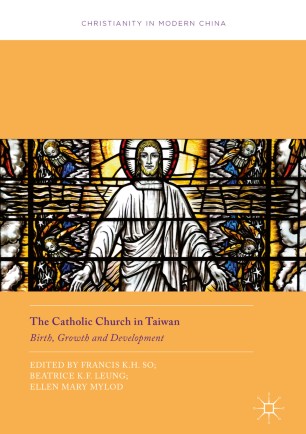 The Catholic Church in Taiwan

Part of the Christianity in Modern China book series (CMC)

This book provides a ground breaking interdisciplinary study of the Catholic Church in Taiwan, focusing on the post 1949 Civil War in China through to the present day, and discusses the role played by the Catholic Church in contemporary Taiwanese society. It considers the situation of the Catholic church of Taiwan during the Japanese Occupation, Taiwan-Vatican Relations from 1949 onwards and triangular Relations among the Vatican, Taiwan and China during Tsai Ing-wen’s Administration. Written from a wide range of perspectives, from history and international relations to literature, philosophy, and education, this volume offers an important perspective on the birth and development of the Catholic Church in Taiwan, contributing a key work to religious studies in the Greater China Region.

Dr Francis H.K. So is Chair Professor of English at Kaohsiung Medical University, Taiwan and is Councilor of the Taiwan Association of Classical, Medieval and Renaissance Studies.  He has published in Chinese and co-edited A Guide to Major Texts in English Literature (2007), Identity and Politics: Early Modern Culture (2005) and Emotions in Literature (2010). Most recently he edited Perceiving Power in Early Modern Europe (Palgrave Macmillan, 2016).

Dr Beatrice K.F. Leung, is a Sister of the Congregation of the Precious Blood. She graduated from the London School of Economics and Political Science. From 1989 to 2004 she taught in universities in Hong Kong and Macau. She is now a visiting research professor in Wenzao Ursuline University of Languages. Her research interest is Sino-Vatican-Taiwan relations.

Mary Ellen Mylod is an Ursuline Sister of the Roman Union of the Order of St. Ursula. She graduated from London University in French and Latin and from the London University Institute of Education. She has worked in Taiwan (Wenzao Ursuline University of Languages), Hong Kong and Xiamen (China) for over 40 years. She was Chairperson of the English Department for 16 years from 1974 and founded the Department of Foreign Language Education in 2003.

“This timely and insightful essay collection balances the study of the institutionalization of Catholicism in Taiwan with a sociocultural analysis of the Catholic faithful.” (Joseph Tse-Hei Lee, Journal of Ecclesiastical History, Vol. 70 (2), April, 2019)