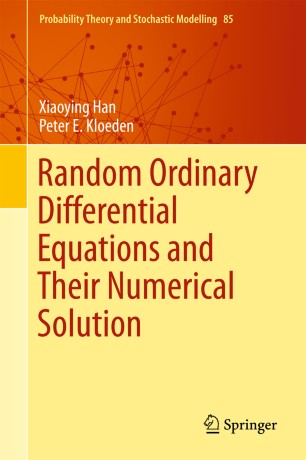 This book is intended to make recent results on the derivation of higher order numerical schemes for random ordinary differential equations (RODEs) available to a broader readership, and to familiarize readers with RODEs themselves as well as the closely associated theory of random dynamical systems. In addition, it demonstrates how RODEs are being used in the biological sciences, where non-Gaussian and bounded noise are often more realistic than the Gaussian white noise in stochastic differential equations (SODEs).

RODEs are used in many important applications and play a fundamental role in the theory of random dynamical systems.  They can be analyzed pathwise with deterministic calculus, but require further treatment beyond that of classical ODE theory due to the lack of smoothness in their time variable. Although classical numerical schemes for ODEs can be used pathwise for RODEs, they rarely attain their traditional order since the solutions of RODEs do not have sufficient smoothness to have Taylor expansions in the usual sense.  However, Taylor-like expansions can be derived for RODEs using an iterated application of the appropriate chain rule in integral form, and represent the starting point for the systematic derivation of consistent higher order numerical schemes for RODEs.

The book is directed at a wide range of readers in applied and computational mathematics and related areas as well as readers who are interested in the applications of mathematical models involving random effects, in particular in the biological sciences.The level of this book is suitable for graduate students in applied mathematics and related areas, computational sciences and systems biology.  A basic knowledge of ordinary differential equations and numerical analysis is required.