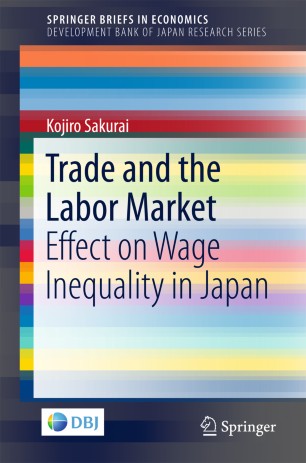 Trade and the Labor Market

Effect on Wage Inequality in Japan

This book presents an integrated overview and evidence, taking Japan as an example, on how international trade, especially with developing countries, affects labor market in developed countries, which has been keenly debated among international and labor economists since the late 1980s. The unique point of this book is that it integrates international trade and labor market into the same framework. The analysis includes both theory and empirical study. It especially pays attention to wage inequality between skilled and unskilled labor represented by nonproduction and production workers, and college graduates and high-school graduates. The estimation method used is to analyze input-output tables containing 55 manufacturing industries during the period 1995-2005, and to measure factor content of trade using these tables.
Main results are as follows: First, both relative wage and relative employment of nonproduction to production workers, and college graduates to high-school graduates increased as a trend since the 1980s, suggesting a relative demand shift toward skilled labor. Second, analysis using input-output tables revealed that employment reduction due to increased imports is greater in production workers than in nonproduction workers, and that employment increase due to increased exports is greater in nonproduction workers than in production workers, suggesting the comparative advantage being at work in line with the Heckscher-Ohlin-Samuelson model. Third, analysis using factor content of trade revealed that increased trade during 1995-2005 especially with Asian countries raised the relative wage of nonproduction to production workers in the aggregated manufacturing sector by 0.023 points (1.400 to 1.422), or by 1.6 percent in terms of rate of change. This estimation result suggests that increased trade in this period played a certain role in widening wage inequality between nonproduction to production workers. These results contribute to a deeper understanding of the effect of globalization on labor market in the field of economics.