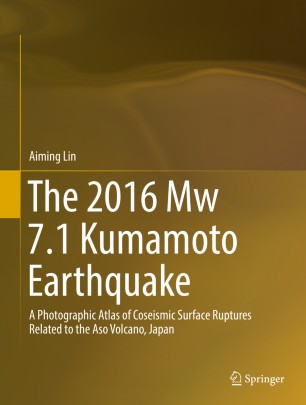 A Photographic Atlas of Coseismic Surface Ruptures Related to the Aso Volcano, Japan

This book shows the deformation characteristics of coseismic surface ruptures produced by the 2016 Kumamoto earthquake and the relationship between the Aso volcano and active faults. In particular, the rupturing mechanisms and processes involved in the seismogenic faults related to the crustal structure under the Aso volcano caldera are covered. The book is intended to help bridge the gaps between seismology, seismic disaster prevention, volcanology, seismotectonics, and geology and to encourage further studies of earthquake mechanisms and seismic faulting processes.​

Dr. Aiming Lin is a professor at Kyoto University and has been working on earthquake geology and active neotectonism. He is particularly interested in the rupture dynamics and mechanics of large earthquakes, tectonic history of active faults, and formation mechanisms of fault rocks generated in seismogenic fault zones from brittle to ductile regimes.