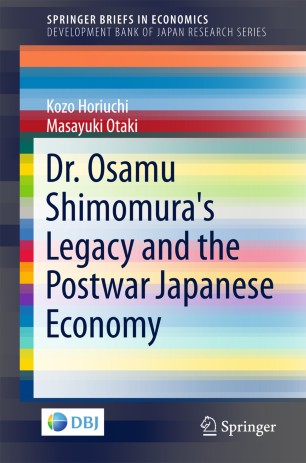 This book elucidates the economic conditions and policies  during the post War Japanese economy from the view point of an influential policy maker. Dr. Osamu Shimomura is one of the most eminent economists in Japan. He entered the Ministry of Finance and played a crucial role in actualizing the High-Growth era from the late 1950s to the early 70s. "The Doubling Income Plan", which is issued by the Ikeda cabinet, originates from him. It should be noted that while most economists held pessimistic view on the future, Shimomura is brave and foresighted.

Shimomura’s theory is not merely one of the pioneer works in macroeconomics, but also suits the economic conditions of Japan. Shimomura extends the principle of effective demand, which means that his theory includes effects of capital accumulation to production capacity. While one may argue that Harrod (1939) and Domar (1946) have already achieved that, Shimomura’s theory centers policy recommendations for sustaining the high economic growth against the productivity growth that would cause excess supply in the market.

Succinctly,  Shimomura is a Keynesian who believes the vigor in its private sector but recognizes that Japanese economy urgently needs the government’s auxiliary macroeconomic policies. This book emphasizes that the rapid Japanese growth owes mainly to affluent entrepreneurship filled in the economy not to the sheer government’s planning. Dr. Shimomura’s theory endorses our assertion.