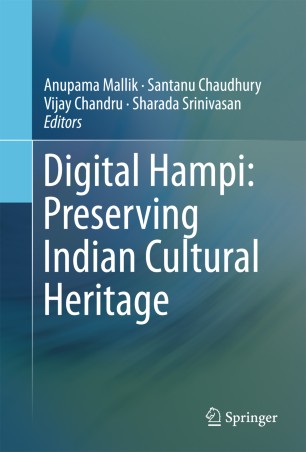 The book represents the culmination of a hugely successful heritage preservation project initiated by the Government of India’s Department of Science and Technology. It presents extensive research on the digital preservation of the history, mythology, art, architecture and culture of the world heritage site Hampi in Karnataka, the seat of the Vijayanagara dynasty in medieval India. Further, the book introduces readers to a range of techniques developed by Indian technical research groups for digitally preserving both the tangible and intangible cultural heritage of the region. These techniques are sufficiently generic to be applied in heritage preservation efforts for other historical sites around the world as well.

Technological advances have made it possible to not only create digital archives of these heritage artifacts, but to also share these resources for people to view, explore, experience, and analyze. This book showcases how cutting-edge technology can be combined with cultural and historical research to digitize and preserve heritage. It is the consolidation of work conducted under the Indian Digital Heritage project, a unique initiative of the Department of Science & Technology (DST), Government of India. The project involved collaboration between researchers in the areas of Technology, Computer Science, Architecture and the Humanities for the digital documentation and interpretation of India’s tangible and intangible heritage. It highlights the art, architecture, and cultural legacy of the world heritage site of Hampi in Karnataka, the medieval capital of the 14th-16th century Vijayanagara dynasty.

The contributors to this book are scientists and technology experts from prominent academic institutes in India such as the IITs (Indian Institutes of Technology), NIIT, and NID (National Institute of Design) working in collaboration with some of India’s top architects, art historians, anthropologists, heritage groups and multi-disciplinary cultural institutions such as the National Institute of Advanced Studies (NIAS). Their papers will introduce readers to cutting-edge technologies from research areas such as computer vision, 3D modeling and artificial intelligence as they are employed to preserve art and culture in the digital domain.

The book is divided into four parts. Part 1 details efforts and techniques for modeling and representing the tangible heritage of Hampi, such as the reconstruction of damaged structures, realistic walk-throughs, and haptic rendering. Part 2 includes chapters detailing the analysis and digital restoration of artifacts such as  mural paintings, inscriptions and sculptures, as well as  mobile-based visual search for artifacts. Part 3 includes chapters on conjectural re-constructions of  the architectural life, social life and traditions of Hampi. Lastly, Part 4 addresses the knowledge-based archiving and exploration of cultural heritage.

Anupama Mallik received her B.Sc in Physics (1986) and her Master's in Computer Applications (1989) from Delhi University, subsequently completing her PhD (2012) in Electrical Engineering at the Indian Institute of Technology (IIT), Delhi. Her PhD thesis dealt with ontology-based exploration of multimedia contents. She is currently associated with the Multimedia Research Group of the Electrical Engineering Department, IIT Delhi and has worked as a Research Scientist in projects sponsored by the Department of Science and Technology, Government of India. She has been teaching courses related to semantic web technologies as visiting faculty at several universities of the Delhi government. She is a member of the Association for Computing Machinery (ACM) and a co-author of the book 'Multimedia Ontology: Representation and Applications' published by the CRC press. She is the founder-Director of a technology start-up focusing on the application of technology in heritage preservation, currently being incubated at IIT Delhi.

Santanu Chaudhury completed his B.Tech (1984) in Electronics and Electrical Communication Engineering and his PhD (1989) in Computer Science and Engineering from Indian Institute of Technology (IIT), Kharagpur. He is a Professor at the Department of Electrical Engineering, Indian Institute of Technology (IIT), Delhi. He was also the Dean of Undergraduate Studies at the IIT Delhi. He was awarded the INSA medal for young scientists in 1993. He is a fellow of the Indian National Academy of Engineering and National Academy of Sciences, India. He is a fellow of International Association of Pattern Recognition (IAPR). He has more than 250 publications in international journals and conference proceedings, and has authored /edited several books. He is currently working as Director of CSIR-Central Electronics Engineering Research Institute (CSIR-CEERI), and is on lien from IIT Delhi.

Vijay Chandru is an academic and an entrepreneur. As an academic, he completed his PhD in the mathematics of decision sciences at MIT in 1982 and has taught at Purdue University (1982–1993) and the Indian Institute of Science (IISc) since 1992. He has co-authored and co-edited several books and published over ninety peer-reviewed research papers. In 1996, he was elected a Fellow of the Indian Academy of Sciences and subsequently of the Indian National Academy of Engineering. As co-convenor of the Perceptual Computing Laboratory (PerCoLat) at IISc for a decade (1995-2005), he participated in semantic web language development, in advances in visualization for scientific data and in development of the Simputer. The International Institute for Art, Culture and Democracy (IIACD) is a Bangalore based research institute. It was founded in 2008 by a multidisciplinary group of academics and practitioners including Professor Chandru. At IIACD, his work in digital humanities have been in the representation, organization and investigation of knowledge-bearing artifacts which have been documented, annotated and archived. As a technology entrepreneur, Professor Chairman serves as the Chairman of Strand Life Sciences, a spinoff from IISc. He was named a Technology Pioneer of the World Economic Forum in 2007 and for contributions to science and society, Professor Chandru was awarded the Hari Om Trust Award by University Grants Commission in 2003.

Sharada Srinivasan, Professor and Dean, School of Humanities at National Institute of Advanced Studies, Bangalore, specialises in technical art history, archaeological sciences, archaeometallurgy, archaeometry and material culture studies.  She has a PhD. from the Institute of Archaeology, University College London (1996) on Archaeometallurgy of South Indian bronzes; MA from School of Oriental & African Studies, London (1989) and B.Tech in Engineering Physics from IIT, Mumbai (1987).  She is Fellow of the Royal Asiatic Society of Great Britain and Ireland, World Academy of Art and Science, and has been Homi Bhabha Fellow, Charles Wallace and V&A Nehru Fellow and Smithsonian Forbes Fellow at Freer Gallery of Art. Her awards include the Dr Kalpana Chawla Young Woman Scientist Award, the Indian Institute of Metals Certificate, Materials Research Society of India Medal, Malti B. Nagar Ethnoarchaeology Award, DST-SERC Young Scientist Award and Flinders Petrie Medal.  She was recipient of British Council funded UKIERI grants for studies on  on Indian wootz steel and for Split-site PhDs with Exeter University in Archaeology and Drama.   She is a Member of the Advisory Boards of Centre for South Asian Studies, University of Exeter, Institute of Archaeometallurgical Studies, London, Ethnoarchaeology Journal, USA and  Standing Committee Member of the Beginning of Use of Metals and Alloys (BUMA) conference series.  She is first author of  ‘India’s legendary wootz steel’ and more than 70 papers   and is also a reputed exponent of classical south Indian dance. She was featured as one of India’s top ten women scientists in the Conde Nast magazine ‘Make in India’ issue of Jan 2017.