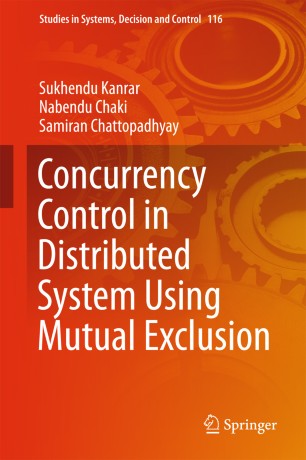 Part of the Studies in Systems, Decision and Control book series (SSDC, volume 116)

The book presents various state-of-the-art approaches for process synchronization in a distributed environment. The range of algorithms discussed in the book starts from token based mutual exclusion algorithms that work on tree based topology. Then there are interesting solutions for more flexible logical topology like a directed graph, with or without cycle. In a completely different approach, one of the chapters presents two recent voting-based DME algorithms. All DME algorithms presented in the book aim to ensure fairness in terms of first come first serve (FCFS) order among equal priority processes. At the same time, the solutions consider the priority of the requesting processes and allocate resource for the earliest request when no such request from a higher priority process is pending.

Sukhendu Kanrar is a faculty member in the Department of Computer Science, Narasinha Dutt College, India. He has done Bachelors in Mathematics from University of Calcutta in 1999. He received MCA in 2004 and M.Tech. in Computer Science in 2010, both from the West Bengal University of Technology. Dr. Kanrar has completed PhD from the University of Calcutta in early 2016. His primary research interest is in the design of Operating Systems for distributed environment.

Nabendu Chaki is a Professor in the Department Computer Science & Engineering, University of Calcutta, Kolkata, India. Dr. Chaki did his first graduation in Physics from the legendary Presidency College in Kolkata and then in Computer Science & Engineering from the University of Calcutta. He has completed Ph.D. in 2000 from Jadavpur University, India. He is sharing 6 international patents including 4 US patents with his students. Prof. Chaki has been quite active in developing international standards for Software Engineering and Cloud Computing as a member of Global Directory (GD) member for ISO-IEC. Besides editing more than 25 book volumes, Nabendu has authored 6 text and research books and has more than150 Scopus Indexed research papers in Journals and International conferences. His areas of research interests include distributed systems, image processing and software engineering. Dr. Chaki has served as a Research Faculty in the Ph.D. program in Software Engineering in U.S. Naval Postgraduate School, Monterey, CA. He is a visiting faculty member for many Universities in India and abroad. Besides being in the editorial board for several international journals, he has also served in the committees of more than 50 international conferences. Prof. Chaki is the founder Chair of ACM Professional Chapter in Kolkata.