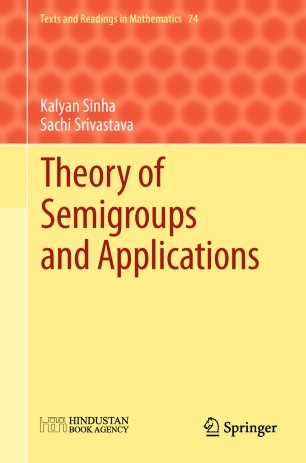 Theory of Semigroups and Applications

Part of the Texts and Readings in Mathematics book series (TRIM, volume 74)

The book presents major topics in semigroups, such as operator theory, partial differential equations, harmonic analysis, probability and statistics and classical and quantum mechanics, and applications. Along with a systematic development of the subject, the book emphasises on the explorations of the contact areas and interfaces, supported by the presentations of explicit computations, wherever feasible. Designed into seven chapters and three appendixes, the book targets to the graduate and senior undergraduate students of mathematics, as well as researchers in the respective areas. The book envisages the pre-requisites of a good understanding of real analysis with elements of the theory of measures and integration, and a first course in functional analysis and in the theory of operators.

Chapters 4 through 6 contain advanced topics, which have many interesting applications such as the Feynman–Kac formula, the central limit theorem and the construction of Markov semigroups. Many examples have been given in each chapter, partly to initiate and motivate the theory developed and partly to underscore the applications. The choice of topics in this vastly developed book is a difficult one, and the authors have made an effort to stay closer to applications instead of bringing in too many abstract concepts.