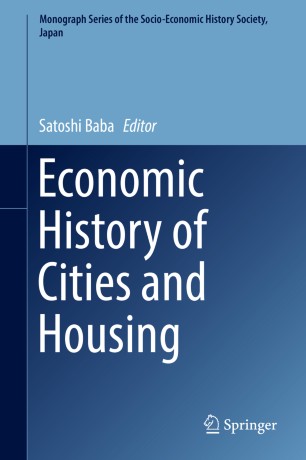 Economic History of Cities and Housing

This book focuses on urbanization as an attendant consequence of industrialization and sheds light on urban problems such as housing shortages and poverty of jobless people, and the housing and social policies implemented by central and local governments to deal with these problems. Through this book, the volume editor and authors convey the view that urbanization transformed economy and society spatially and in quality, and caused the change of central and local administration in the process of tackling various urban problems. The book features recent academic works on economic history of the city and housing, researched from an advanced perspective of comparative history in Japan. The aim of this book is to make works by Japanese scholars accessible to a wider readership throughout the world.

This edited volume includes four articles (chapters) and four book reviews originally published in Japanese and subsequently translated into English. The first chapter analyzes the characteristics of the urbanization that occurred under the land readjustment projects implemented from the Sino-Japanese War to the reforms following World War II, by focusing on the conflict between landowners and peasants in Japan. The second chapter examines the construction of urban housing following Japan’s defeat in World War II, focusing on the reconstruction of war-damaged housing from the perspective of the creation and distribution of private residential space under Japan’s postwar regulatory regime. The third chapter examines the adoption of communal unemployment insurance systems in Wilhelmine Germany, focusing on the Genter system, in which the municipalities paid subsidies to the trade unions that provided their out-of-work members with unemployment benefits. The last chapter investigates the accumulation of the mechanical engineering industry in Paris region during the period 1939–1958, focusing on the role of the subcontracting system.