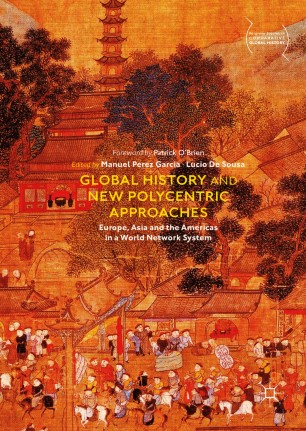 Europe, Asia and the Americas in a World Network System

Rethinking the ways global history is envisioned and conceptualized in diverse countries such as China, Japan, Mexico or Spain, this collections considers how global issues are connected with our local and national communities. It examines how the discipline had evolved in various historiographies, from Anglo Saxon to southern European, and its emergence in Asia with the rapid development of the Chinese economy motivation to legitimate the current uniqueness of the history and economy of the nation. It contributes to the revitalization of the field of global history in Chinese historiography, which have been dominated by national narratives and promotes a debate to open new venues in which important features such as scholarly mobility, diversity and internationalization are firmly rooted, putting aside national specificities. Dealing with new approaches on the use of empirical data by framing the proper questions and hypotheses and connecting western and eastern sources, this text opens a new forum of discussion on how global history has penetrated in western and eastern historiographies, moving the pivotal axis of analysis from national perspectives to open new venues of global history.

Manuel Perez Garcia is tenured Associate Professor at the Department of History, Shanghai Jiao Tong University. He obtained his PhD at the European University Institute (Florence, Italy). He has been awarded with an ERC (European Research Council)-Starting Grant, Horizon 2020 to conduct the GECEM project - 679371 (Global Encounters between China and Europe) www.gecem.eu.

He is founder and director of the Global History Network (GHN) in China www.globalhistorynetwork.com, Distinguished Professor by the University Pablo de Olavide (Seville, Spain), European host institution of GECEM. He was research fellow at UCBerkeley, Tsinghua University (Beijing, China) in 2011, and visiting professor at UNAM (Mexico) and University of Macerata (Italy). Among his publications stands out Vicarious Consumers, published in 2013.

He obtained in Ph.D. course in Asian Studies  at University of Oporto (Oporto, Portugal). He is member of the steering committee of  Global History Network. He was a Post Doctoral Fellow at European University Institute (Florence, Italy); and Research Associate at Historiographical Institute (史料編纂所), University of Tokyo, Department of Foreign Materials. He was a book winner by the Macao Foundation, the Social Science in China Press and the GuangDong Social Sciences Association (2013), the Portuguese Academy of History and the Gulbenkian Foundation Award (2019).

His primary field of research is the slave trade and Jewish Diaspora in Asia in the Early Modern Period.

“As a welcome antidote to the narrow national narratives that East Asian countries have constructed as their modern histories, this volume’s essays show how a more global perspective, enlivened by a Latin American twist, can deepen and broaden our understanding of Chinese history. A clear sign of where this kind of history writing is heading in East Asian studies.” (Joe McDermott, Emeritus Reader, University of Cambridge, UK)

“The development of a global economy has generated a movement for a truly global history. There is still a long way to go, but this volume of essays by Western and Asian historians constitutes a brave attempt to bridge the great divide.” (Sir John Elliott, Regius Professor of Modern History, University of Oxford, UK)

“The multiple perspectives offered by this volume’s chapters together make an important contribution to the goal of transforming global history from an aspiration to a reality.” (Jan de Vries, Ehrman Professor Emeritus, University of California at Berkeley, USA)

“These scholars delve deeply into Asian data and global interpretation, showing the centrality of East Asia in the trade networks of the early modern world. They successfully set Atlantic developments in the context of the Asia-Pacific region.” (Patrick Manning, Andrew W. Mellon Professor of World History, Emeritus, University of Pittsburgh, USA)

“This is a stimulating attempt to present Global History, focusing on comparison of Maritime History between the Asia-Pacific and the Atlantic. Readers may clearly understand a rich historiography in East Asia on Global/World History studies.” (Shigeru Akita, Chairman, Asian Association of World Historians, South Korea and Professor of British Imperial History and Global History, Osaka University, Japan)

“Manuel Perez Garcia and Lucio de Souza have edited a thought-provoking volume, addressing the question of global history as conceived by European, Chinese and Japanese scholars, and revitalizing this field of studies in East Asian historiography. No doubt that this volume, linking maritime history and global history, will open new paths of research free of any “centrisms” as has often been the case so far. The various chapters that make up this volume combine different scales of analysis (local, regional, transnational and global) to implement a truly interdisciplinary analysis of a world network system that has shaped international trade from the the XVIth through the XIXth centuries.” (Francois Gipouloux, Emeritus Research Director, National Centre for Scientific Research, France)

“A thoroughly, well-organised and outstanding book for a deeper understanding of the real impact of global history on East Asian historiographies and fresh insights on intercontinental comparisons.” (Liu Beicheng, Professor, Tsinghua University, China)

“This book demonstrates superbly the important contribution of GECEM project and the Global History Network (GHN) in bringing together diverse Asian, European and American historiographical approaches based on different methods, sources, and theories. The cases presented urge a careful reconceptualization of our received streams of thought, a process that will open exciting new routes for grasping history and expanding our cognitive capabilities, as the challenges of our rapidly globalizing world demand.” (J. B. Owens, Research Professor, Idaho State University, USA)

“Global history releases itself from the straightjacket of national boundaries and supersedes the East-West divide that still characterises much scholarship: in this book, the early modern world is analysed by a new type of global polycentric history.” (Giorgio Riello, Professor, University of Warwick, UK)

“Global History and New Polycentric Approaches features a group of scholarly essays from western and eastern historians that clearly show how to assess the great questions posed by a truly global history. The book is a must – read for academics and students that want to deepen their understanding of modern world history.”(Antonio Ibarra Romero, Professor, Universidad Nacional Autonoma de Mexico, Mexico)

“Unusually for a modern collection, this volume of fifteen substantial essays is both inclusive in case-study and cogent in intention. Here is the new history of the world, presented not as one only of military and commercial conflicts between nations, but one of connection, commerce and culture between interests, classes and groups, who so often established globalism with little direct aid from - or even reference to - any state. The book has captured the added advantages of accessibility, working at both graduate and undergraduate levels, and introducing a number of new scholars from Japan, China, Europe and the USA to a wider public. The editor must be congratulated.” (Ian Inkster, Professor, SOAS, University of London, UK)