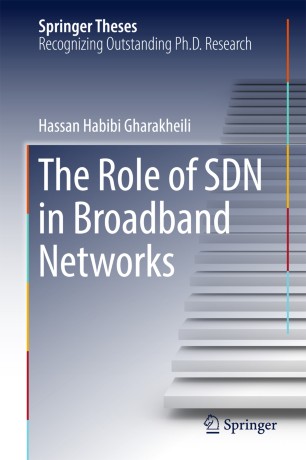 The Role of SDN in Broadband Networks

This thesis focuses on the design and use of software defined networking (SDN) in residential Internet service providers (ISPs), as well as innovative operational models that can be incorporated in broadband ecosystems. Though SDN addresses the challenges for bundled best-effort service provided by broadband operators for users, it does not distinguish between the different types of applications (video streaming, web-browsing, and large file transfers), nor does it cater to the varying needs of different household devices (entertainment tablets, work laptops, or connected appliances). This is a problem for end-users, who want to differentiate between applications and devices; for content providers (CPs), who want to exercise control over streams of high monetary value; and for Internet service providers (ISPs), who have to accommodate growing traffic volumes without additional revenues.
This book develops a series of solution techniques that use SDN to find an optimal balance between the competing requirements of end-users, ISPs, and CPs. In addition to the design and discussions of various architectures, it provides technical details on real-world system implementations and prototypes. As such, it offers a valuable resource for researchers, network architects, network strategists, developers, and all other readers seeking to learn more about the practical value of SDN in future ISP networks.