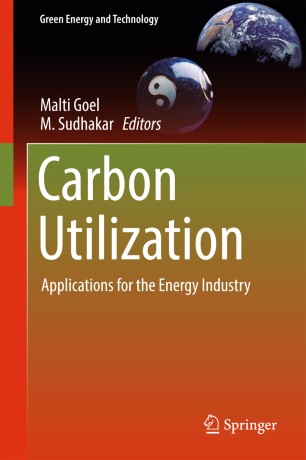 Applications for the Energy Industry

This book provides in-depth information on topics relating to anthropogenic carbon dioxide utilization processes. Presenting a collection of state-of-the-art scientific reviews and research perspectives on carbon management strategies of relevance to the energy industry, it features contributions by leading scientists and technocrats across 19 chapters as an Indian contribution In the energy industry, new processes for carbon dioxide removal and recycling are developing quickly, and it is in this context that the book provides an opportunity to review the current status of and promote efforts to achieve effective carbon capture and management. The contents presented here will prove useful to researchers, students, industry experts, scientists and policymakers alike.

Dr. (Mrs.) Malti Goel is a Physicist, former Adviser, Government of India and was affiliated with the Centre for Studies in Science Policy Studies, JNU and the Indian National Science Academy (INSA) as CSIR Emeritus Scientist. She obtained her Bachelor’s and Master’s degrees in Physics at the Birla Institute of Technology & Science (BITS), Pilani, and received r D.I.I.T. Solid State Physics and Ph.D. in Physics from another premier institute, the Indian Institute of Technology (IIT), Delhi. She is a recipient of gold medal in M.Sc. Physics and a topper in D.I.I.T. As Research Associate at the Center for Materials Science, IIT Delhi her research on polymers and dielectrics has been published in International Journals and was cited in patents. She has 26 years of experience in science administration in  the Department of Science & Technology (DST), Ministry of Science and Technology and has served on a number of programme advisory committees and other national committees for the promotion of thrust area programmes in the Physical Sciences and Atmospheric Sciences research in India, Dr. Malti Goel  headed the Science & Technology Advisory Committee Division and represented on several Science & Technology Advisory Committees in the economic Ministries and the environment Ministry of Govt. of India . She was instrumental in catalyzing joint R&D projects with them at the national level.

Dr. Malti Goel has led the national research programme on carbon sequestration as Scientist ‘G’ and Adviser. Her work has led to recognitions and many awards; Er. Abinash Chandra Chaturvedi Medal 2006 for excellence in Environment Science & Technology, Bharat Jyoti Award in 2012 and the Build India Corporate Award in 2015 to name a few. She represented India as Vice-Chair to the Technical Group of the International Carbon Sequestration Leadership Forum (CSLF) (2006-2008).  She was invited to the official ceremony for the award Erice- Science for Peace 2006 held in the Vatican, Rome. She served as Science Diplomacy Ambassador for the Energy Workshop - 2013 of The Third World Academy for Advancement of Science in developing countries, Trieste.  She authored the book on Energy Sources and Global Warming in 2005 and has since contributed several books and published 240 scientific papers in journals of international repute and conferences. She has also served on a number of high-level scientific committees and in the board of important professional bodies in India. She is founder of the Climate Change Research Institute.

Dr. M. Sudhakar, Scientist-G, Ministry of Earth Sciences, New Delhi, is currently the Director of the CMLRE. Dr. Sudhakar received his Ph.D. from the Indian School of Mines, Dhanbad and a Master’s degree in Law of the Sea and Marine Policy in 1990 from the London School of Economics & Political Science, UK as a British Council Fellow. Dr. Sudhakar served two of India’s premier research institutions – the National Institute of Oceanography (NIO) & the National Centre for Antarctic and Ocean Research (NCAOR) in Goa – and has held various positions such as project leader and scientist in various grades. He is a veteran Oceanographer with 33 years of professional experience, and has spent more than 1500 days at sea on-board research vessels, as leader of expeditions to the Southern Ocean and Antarctica.

Dr. Sudhakar represented India at the Preparatory Commission for the United Nations Law of the Sea (PrepCom) and was involved in the deliberations for assigning the title Pioneer Area of Polymetallic Nodules in the Indian Ocean to India in 1987. Dr. Sudhakar was an Elected Member of the Legal & Technical Commission (LTC) of the International Seabed Authority (ISBA) for the term 2007–2011 and was recently elected for a second term (2012–16). He is also a member of the Scientific Committee on Ocean Research (SCOR), ICSU, serving for second term until 2014. He was a visiting scientist to the Aachen University of Technology, Germany; a researcher at the International Ocean Institute, Malta; a member of the National Steering Committee for Science and Astronomy Olympiads and of the Scientific Committee, International Geological Congress (2020 to be held in India). He was the “Commissioner General” of the Govt. of India for the Yeosu (World) Expo 2012 held in the Republic of Korea. He is an Elected Fellow of various national and international organizations. Dr. Sudhakar has served on many national committees and is presently serving many departmental and national committees. He has published over 60 research papers in refereed international/national journals, books and for conferences and seminars. He has been a reviewer for scientific journals and prepared a special section on India’s Contribution to the Southern Ocean in Current Science Journal as Guest Editor.