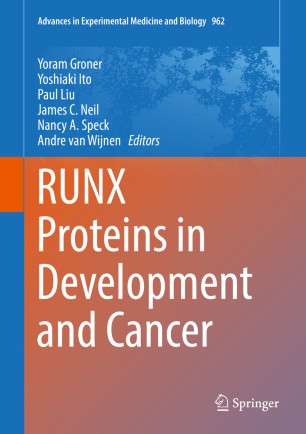 RUNX Proteins in Development and Cancer

Part of the Advances in Experimental Medicine and Biology book series (AEMB, volume 962)

This volume provides the reader with an overview of the diverse functions of the RUNX family of genes. As highlighted in the introduction and several of the 29 chapters, humans and other mammals have three RUNX genes that are known to play specific roles in blood, bone and neuronal development. However, their evolutionary history has recently been traced back to unicellular organisms and their involvement in many well-known signaling pathways (Wnt, TGFb, Notch, Hippo) is indicative of a more general function in cell biology. Their documented roles in cell fate decisions include control of proliferation, differentiation, survival, senescence and autophagy.

The pleiotropic effects of RUNX in development are mirrored in cancer, where RUNX genes can function as oncogenes that collaborate strongly with Myc family oncogenes or as tumour suppressor genes. In the latter role, they display hallmarks of both ‘gatekeepers’ that modulate p53 responses and ‘caretakers’ that protect the genome from DNA damage. Several chapters focus on the importance of these genes in leukemia research, where RUNX1 and CBFB are frequently affected by chromosomal translocations that generate fusion oncoproteins, while recent studies suggest wider roles for RUNX modulation in solid cancers. Moreover, RUNX genes are intimately involved in the development and regulation of the immune system, while emerging evidence suggests a role in innate immunity to infectious agents, including HIV.

At the biochemical level, the RUNX family can serve as activators or repressors of transcription and as stable mediators of epigenetic memory through mitosis. Not surprisingly, RUNX activity is controlled at multiple levels, this includes miRNAs and a plethora of post-translational modifications. Several chapters highlight the interplay between the three mammalian RUNX genes, where cross-talk and partial functional redundancies are evident. Finally, structural analysis of the RUNX/CBFB interaction has led to the development of small molecule inhibitors that provide exciting new tools to decipher the roles of RUNX in development and as targets for therapy.

This volume provides a compendium and reference source that will be of broad interest to cancer researchers, developmental biologists and immunologists.