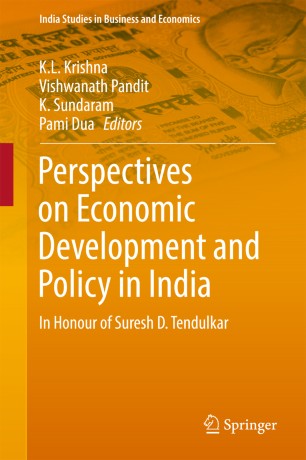 In Honour of Suresh D. Tendulkar

The book pays tribute to the celebrated economist Professor Suresh Tendulkar’s contribution and scholarship to economics, economic-policy making, and economic reforms in India. Professor Tendulkar served on numerous panels and commissions set up to reform diverse aspects of India’s economy. To name a few, he served as the Chairperson of the Prime Minister’s Economic Advisory Council, Chairman of the National Commission of Statistics, National Sample Survey Organisation, Committee on National Accounts, and as a member in the Fifth Pay Commission, the Disinvestment Commission (1996). He is credited with devising the new method to estimate poverty in India which resulted in India’s poverty estimates being scaled up.

This book primarily focuses on Professor Tendulkar’s contributions on economic planning in India, the political economy of economic reforms, and his important conceptual and policy-relevant work on poverty measurement. The three sub-themes of the book – Economic Reforms and Policy Formulation, Poverty and Inequality, and Development and Trade – are indicative of his specific research interests, namely poverty and well-being, and India and the world economy. It covers both micro and macro aspects relevant to the Indian economy. The econometric techniques utilized encompass state-of-the-art microeconometric as well as macroeconometric models. The book contains contributions from eminent economists associated with Professor Tendulkar, and is useful for readers from the undergraduate through the Ph.D. level as well as researchers and practitioners of economics.