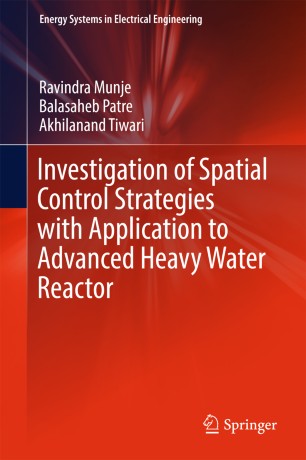 This book examines the different spatial control techniques for regulation of spatial power distribution in advanced heavy water reactors (AHWR). It begins with a review of the literature pertinent to the modeling and control of large reactors. It also offers a nodal-core model based on finite difference approximation since the AHWR core is considered to be divided into 17 relatively large nodes. Further, it introduces a nonlinear model characterizing important thermal hydraulics parameters of AHWR and integrates it into the neutronics model to obtain a coupled neutronics-thermal hydraulics model of AHWR. The book also presents a vectorized nonlinear model of AHWR and implements it in MATLAB/Simulink environment. The model of the reactor is then linearized at the rated power and put into standard state variable form. It is characterized by 90 states, 5 inputs and 18 outputs. Lastly, it discusses control techniques for a nonlinear model of AHWR. This book will prove to be a valuable resource for professional engineers and implementation specialists, researchers and students.