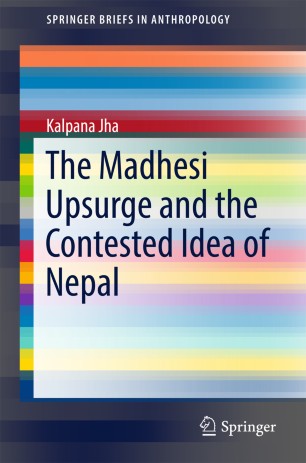 The Madhesi Upsurge and the Contested Idea of Nepal

Part of the SpringerBriefs in Anthropology book series (BRIEFSANTHRO)

This book is set against the burning issue of ethnic uprisings in the Madhes region of Nepal and analyses debates on the idea of contemporary Nepal. The limited view of Nepal as a primarily hill nation with Nepali-speaking people ignores the vast ethnic and linguistic diversity of the country. It has particularly rendered stateless the Madhesi community which inhabits the plains bordering India and shares closer cultural affinity and marital ties across the border. Increasing demands for ethnic and territorial autonomy by the Madhesis suggest the need for redefining the idea of Nepal and establishing Madhesi identity as Nepali identity while at the same time addressing the deeply contested idea of regional versus social identity in the region. This book uses narratives from the Madhesi community including from prominent Madhesi analysts and activists, to define their identity as well as their aspirations in a democratic Nepal. It also provides a perspective on the internal dynamics of caste and language of this region and their possible impact on consolidating ethnic identities in Nepal.