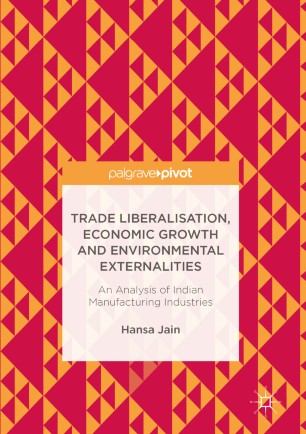 An Analysis of Indian Manufacturing Industries

The book examines the trade liberalization measures, which were initiated in India during 1991 and which focused on manufacturing industries. This industry was considered because of its strong inter-sectoral links and its capacity to stimulate the growth of other sectors. The resulting liberal trade policies, involving a reduction in trade barriers and inflows of FDI, capital and technologies, were adopted to increase the manufacturing output.  However, these measures were most beneficial to those industries whose products have greater demand in developed countries.  Against this backdrop, the book breaks down the overall effect of trade-induced manufacturing growth into scale, composition and technique effects to discuss the impact on environmental externality. In addition to manufacturing activity, it also investigates the effect of other factors that improve with economic growth and examines the extent to which India’s trade-led economic growth allows production activities to move to cleaner technologies and whether India has achieved its economic growth by specializing in pollution-intensive (low technology) industries. The book also estimates the impact of these environmental externalities on society’s wellbeing.
Hansa Jain is Associate Professor of Economics at Sardar Patel Institute of Economic and Social Research, Ahmedabad.  She has over two decades of experience in teaching and research. She has held visiting positions in some of the Indian universities as well as institutes. Her research work focuses on economic growth, international trade, environment, regional disparities and socio-economic development. She has also evaluated many government level schemes on development. Her research work is published in well-known journals of national and international importance and she has also authored two books.