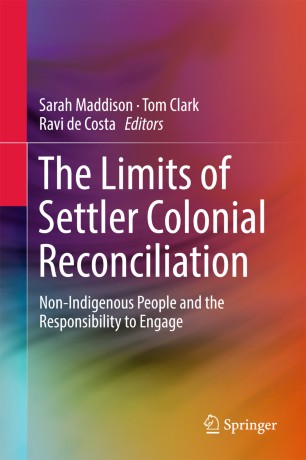 The Limits of Settler Colonial Reconciliation

Non-Indigenous People and the Responsibility to Engage

This book investigates whether and how reconciliation in Australia and other settler colonial societies might connect to the attitudes of non-Indigenous people in ways that promote a deeper engagement with Indigenous needs and aspirations. It explores concepts and practices of reconciliation, considering the structural and attitudinal limits to such efforts in settler colonial countries. Bringing together contributions by the world’s leading experts on settler colonialism and the politics of reconciliation, it complements current research approaches to the problems of responsibility and engagement between Aboriginal and non-Aboriginal peoples.

Tom Clark is the Discipline Group Leader for College of Arts staff teaching and researching in Writing, Communication, and Culture. His teaching at Victoria University has been at the forefront of developing studies in Public Speaking for the Communications curriculum in Australia. Tom's published research into rhetoric and poetic style focuses on analyses of political communication. It includes his 2012 book 'Stay on Message: Poetry and Truthfulness in Public Speech.' It also includes research into non-Indigenous attitudes towards Aboriginal reconciliation in Australia and Canada, and an on-going program of research into poetry teaching in Australian schools. Tom is the President of the Australasian Universities Language and Literature Association.

Sarah Maddison is an Australian author and Associate Professor of Politics in the School of Social and Political Sciences at the University of Melbourne. In 2009 she was joint winner of the Australian Political Science Association Henry Mayer Award for her book Black Politics: Inside the complexity of Aboriginal political culture. In 2009 she was also part of the Sydney Leadership Program ran by Social Leadership Australia at The Benevolent Society. Sarah’s research interests include reconciliation and conflict transformation, agonistic democracy, dialogue, and Australian social movements, including research on the Indigenous rights movement and the women’s movement. Sarah received a 2009 Churchill Fellowship to study models of Indigenous representation in the United States and Canada in 2010. She has been an ARC Discovery Project grant recipient for two completed projects, one considering new possibilities for Indigenous representation and one considering the evolution of social movements through a study of the Australian women’s movement, which produced the edited collection The Women's Movement in Protest, Institutions and the Internet: Australia in transnational perspective.

Ravi de Costa is Associate Professor and Associate Dean for Research in the Faculty of Environmental Studies at York University, Toronto. He has written on the politics of reconciliation in Australia and Canada, as well as on treaty-making, the global Indigenous movement and the UN Declaration on the Rights of Indigenous Peoples. His previous work includes A higher authority: Indigenous transnationalism and Australia (UNSW Press, 2006).