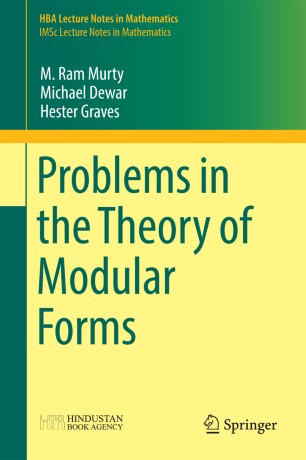 Problems in the Theory of Modular Forms

This book introduces the reader to the fascinating world of modular forms through a problem-solving approach. As such, besides researchers, the book can be used by the undergraduate and graduate students for self-instruction. The topics covered include q-series, the modular group, the upper half-plane, modular forms of level one and higher level, the Ramanujan τ-function, the Petersson inner product, Hecke operators, Dirichlet series attached to modular forms and further special topics. It can be viewed as a gentle introduction for a deeper study of the subject. Thus, it is ideal for non-experts seeking an entry into the field.

M. Ram Murty is professor at the Department of Mathematics and Statistics at Queen’s University, Canada, where he is a Queen's Research Chair in Mathematics. He is also professor of philosophy at Queen’s. He was elected a fellow of the Royal Society of Canada in 1990, the Indian National Science Academy in 2008, and won the Coxeter–James Prize, Jeffery–Williams Prize, the E.W.R. Steacie Fellowship, and the Killam Fellowship. His research areas include number theory, modular forms, elliptic curves, and sieve theory. An author of over five books with Springer, his book Non-vanishing of L-functions and Applications, coauthored by his brother V. Kumar Murty, won the 1996 Balaguer Prize and was published by Birkhauser. In addition, Ram is adjunct professor at McGill University; TIFR; IMSc; CMI; IIT Bombay; IISER, West Bengal; Vivekananda University; and Harish Chandra Research Institute, Uttar Pradesh.

Michael Dewar is a post-doctorate fellow at the Queen’s University, Canada. He did his PhD on “Ramanujan congruences in modular forms” from the University of Illinois at Urbana-Champaign, United States. His research interest lies in modular forms, Jacobi forms, and harmonic weak Maass forms.

Hester Graves is professor at the Department of Mathematics, University of Michigan in Ann Arbor, United States.