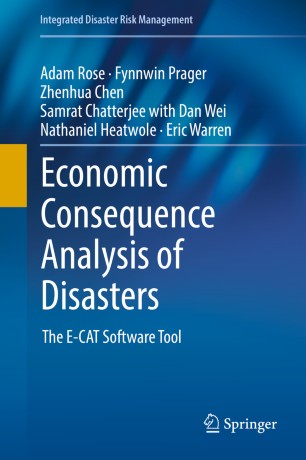 This study develops a methodology for rapidly obtaining approximate estimates of the economic consequences from numerous natural, man-made and technological threats. This software tool is intended for use by various decision makers and analysts to obtain estimates rapidly. It is programmed in Excel and Visual Basic for Applications (VBA) to facilitate its use. This tool is called E-CAT (Economic Consequence Analysis Tool) and accounts for the cumulative direct and indirect impacts (including resilience and behavioral factors that significantly affect base estimates) on the U.S. economy. E-CAT is intended to be a major step toward advancing the current state of economic consequence analysis (ECA) and also contributing to and developing interest in further research into complex but rapid turnaround approaches.
The essence of the methodology involves running numerous simulations in a computable general equilibrium (CGE) model for each threat, yielding synthetic data for the estimation of a single regression equation based on the identification of key explanatory variables (threat characteristics and background conditions). This transforms the results of a complex model, which is beyond the reach of most users, into a "reduced form" model that is readily comprehensible. Functionality has been built into E-CAT so that its users can switch various consequence categories on and off in order to create customized profiles of economic consequences of numerous risk events. E-CAT incorporates uncertainty on both the input and output side in the course of the analysis.