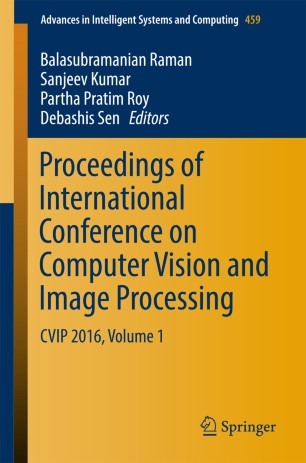 Proceedings of International Conference on Computer Vision and Image Processing

Part of the Advances in Intelligent Systems and Computing book series (AISC, volume 459)

This edited volume contains technical contributions in the field of computer vision and image processing presented at the First International Conference on Computer Vision and Image Processing (CVIP 2016). The contributions are thematically divided based on their relation to operations at the lower, middle and higher levels of vision systems, and their applications.

The technical contributions in the areas of segmentation and retrieval are classified as related to mid-level operations. They discuss some state-of-the-art techniques – non-rigid  image registration, iterative image partitioning, egocentric object detection and video shot boundary detection.The technical contributions in the areas of classification and retrieval are categorized as related to high-level operations. They discuss some state-of-the-art approaches – extreme learning machines, and target, gesture and action recognition. A non-regularized state preserving extreme learning machine is presented for natural scene classification. An algorithm for human action recognition through dynamic frame warping based on depth cues is given. Target recognition in night vision through convolutional neural network is also presented. Use of convolutional neural network in detecting static hand gesture is also discussed.

Finally, the technical contributions in the areas of surveillance, coding and data security, and biometrics and document processing are considered as applications of computer vision and image processing. They discuss some contemporary applications. A few of them are a system for tackling blind curves, a quick reaction target acquisition and tracking system, an algorithm to detect for copy-move forgery based on circle block, a novel visual secret sharing scheme using affine cipher and image interleaving, a finger knuckle print recognition system based on wavelet and Gabor filtering, and a palmprint recognition based on minutiae quadruplets.

Balasubramanian Raman is an Associate Professor in the Department of Computer Science and Engineering at Indian Institute of Technology Roorkee from 2013. He has obtained MSc degree in Mathematics from Madras Christian College (University of Madras) in 1996 and PhD from Indian Institute of Technology Madras in 2001. He was a post doctoral fellow at University of Missouri Columbia, USA in 2001–2002 and a post doctoral associate at Rutgers, the State University of New Jersey, USA in 2002–2003. He joined Department of Mathematics at Indian Institute of Technology Roorkee as Lecturer in 2004 and became Assistant Professor in 2006 and Associate Professor in 2012. He was a Visiting Professor and a member of Computer Vision and Sensing Systems Laboratory in the Department of Electrical and Computer Engineering at University of Windsor, Canada during May August 2009. So far he has published more than 190 papers in reputed Journals and Conferences. His area of research includes vision geometry, digital watermarking using mathematical transformations, image fusion, biometrics and secure image transmission over wireless channel, content based image retrieval and hyperspectral imaging.

Sanjeev Kumar is working as an Assistant Professor with Department of Mathematics, Indian Institute of Technology Roorkee from November 2010. Earlier, he worked as a postdoctoral fellow with Department of Mathematics and Computer Science, University of Udine, Italy from March 2008 to November 2010. He has completed his PhD in Mathematics from IIT Roorkee, India in 2008. His areas of research include image processing, inverse problems and machine learning. He has co-convened the first international conference on computer vision and image processing in 2016, and has served as a reviewer and program committee member of more than 20 international journals and conferences. He conducted two workshops on Image Processing at IIT Roorkee in recent years. He has published more than 55 papers in various international journals and reputed conferences. He has completed a couple of sponsored research projects.

Partha Pratim Roy received his PhD degree in Computer Science  in 2010 from Universitat Autònoma de Barcelona, Spain. He worked as postdoctoral research fellow in the Computer Science Laboratory (LI, RFAI group), France and in Synchromedia Lab, Canada. He also worked as Visiting Scientist at Indian Statistical Institute, Kolkata, India in 2012 and 2014. Presently, Dr. Roy is working as Assistant Professor at Department of Computer Science and Engineering, Indian Institute of Technology (IIT), Roorkee. His main research area is Pattern Recognition. He has published more than 60 research papers in various international journals, conference proceedings. Dr. Roy has participated in several national and international projects funded by the Spanish and French government. In  2009, he won the best student paper award in International Conference on Document Analysis and Recognition (ICDAR). He has gathered industrial experience while working as an Assistant System Engineer in TATA Consultancy Services (India) from 2003 to 2005 and as Chief Engineer in Samsung, Noida from 2013 to 2014.

Debashis Sen is an Assistant Professor at the Department of Electronics and Electrical Communication Engineering in Indian Institute of Technology (IIT) Kharagpur. Earlier, from September 2014 to May 2015, he was an Assistant Professor at the Department of Computer Science and Engineering in Indian Institute of Technology (IIT) Roorkee. Before joining Indian Institute of Technology, he had worked as a post-doctoral research fellow at School of Computing, National University of Singapore for about 3 years. He received his PhD degree from the faculty of engineering, Jadavpur University, Kolkata, India in 2011 and his M.A.Sc. degree from the Department of Electrical and Computer Engineering, Concordia University, Montreal, Canada in 2005. He has worked at the Center for Soft Computing Research of Indian Statistical Institute from 2005 to 2011 as a research scholar, and at the center for signal processing and communications and video processing and communications group of Concordia University as a research assistant from 2003 to 2005. He is currently an associate editor of IET Image Processing journal. He has co-convened the first international conference on computer vision and image processing in 2016, and has served as a reviewer and program committee member of more than 30 international journals and conferences. Over the last decade, he has published in high impact international journals, which are well cited, and has received two best paper awards. He heads the vision, image and perception group in IIT Kharagpur. He is a member of Institute of Electrical and Electronics Engineers (IEEE), IEEE Signal Processing Society and Vision Science Society (VSS). His research interests are in vision, image and video processing, uncertainty handling, bio-inspired computation, eye movement analysis, computational visual perception and multimedia signal processing.