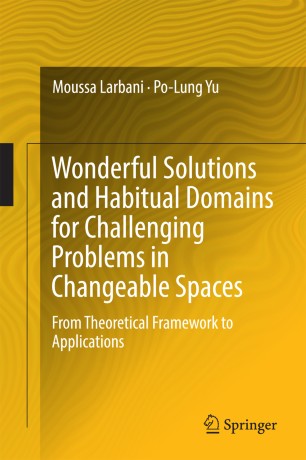 From Theoretical Framework to Applications

This book introduces a new paradigm called ‘Optimization in Changeable Spaces’ (OCS) as a useful tool for decision making and problem solving. It illustrates how OCS incorporates, searches, and constructively restructures the parameters, tangible and intangible, involved in the process of decision making. The book elaborates on OCS problems that can be modeled and solved effectively by using the concepts of competence set analysis, Habitual Domain (HD) and the mental operators called the 7-8-9 principles of deep knowledge of HD. In addition, new concepts of covering and discovering processes are proposed and formulated as mathematical tools to solve OCS problems. The book also includes reformulations of a number of illustrative real-life challenging problems that cannot be solved by traditional optimization techniques into OCS problems, and details how they can be addressed. Beyond that, it also includes perspectives related to innovation dynamics, management, artificial intelligence, artificial and e-economics, scientific discovery and knowledge extraction. This book will be of interest to managers of businesses and institutions, policy makers, and educators and students of decision making and behavior in DBA and/or MBA.

Moussa Larbani is a professor at the International Islamic University Malaysia (IIUM). He earned his bachelor’s degree in mathematics, majoring in operations research from USTHB University, Algiers, Algeria in 1985, and his Ph.D. in ordinary differential equations and optimal control from Odessa State University, Ukraine in 1991. He has been Associate Professor at UMMTO University, Tizi-Ouzou, Algeria from 1991-2001. He then joined IIUM University in Kuala Lumpur, Malaysia until 2006. He spent one year at Kainan University in Taiwan and re-joined IIUM University in Kuala Lumpur, Malaysia in 2007. He has been a Professor at IIUM University since 2010. His current research interests include decision making, Habitual Domain theory, fuzzy game theory, supply chain management and multiple criteria problems involving uncertainty. Dr. Larbani has made a significant contribution to the theory of second order games and the theory of decision making in changeable spaces with Prof. P.L. Yu. Moreover, he has published more than 50 articles over multiple objective programming, fuzzy games, differential equations, supply chain management, data mining and finance.

Po-Lung Yu, Distinguished Professor (Emeritus) of University of Kansas (KU), Kansas, and Distinguished Professor for Life of National Chiao-Tung University (NCTU), Taiwan, was raised in Taiwan, further educated and trained in USA. He earned BA—International Trade (1963) from National Taiwan University, and Ph.D.—Operations Research and Industrial Engineering (1969) from the Johns Hopkins University. From 1977 to 2004, Dr. Yu held an endowed Chair as the Carl A. Scupin Distinguished Professor of the University of Kansas. He taught at NCTU from 1999 to 2011. Previously he taught at the University of Rochester (1969-73) and the University of Texas at Austin (1973-77). He won awards for outstanding research and for teaching. Dr. Yu, the initiator of Habitual Domains theory, competence set analysis and second order games, has published, in English and Chinese, 22 books and over 180 professional articles over multiple criteria decision making, mathematical programming, differential games and optimal control theory, and various application problems including investment models, efficient market, marketing, automobile safety and energy policy, corporate acquisition and merger analysis, aside from what he initiated. Dr. Yu is recognized internationally as a remarkable thinker, scholar, teacher and advisor. He has given many keynote addresses around the world, academically and publicly. His audiences of Habitual Domains and related topics, sometimes exceeded thousands of people, include professors, students, corporate executives, ministers, military generals, monks, nuns, house wives, jail prisoners, etc.

“The book serves as a corrective to purely quantitative approaches to decision making and problem solving, and it will interest both those studying decision making in the abstract and those, such as business leaders and engineers, who make decisions every day. The book will enable both groups to understand better the complexities of decision making and to expand their problem-solving skill sets.” (Computing Reviews, May, 2017)
Buy options