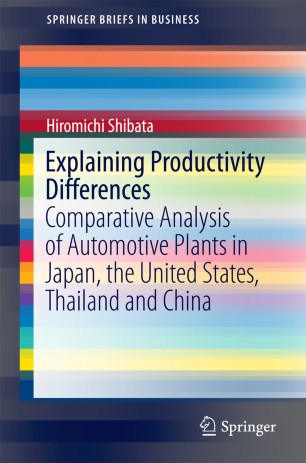 Comparative Analysis of Automotive Plants in Japan, the United States, Thailand and China

Part of the SpringerBriefs in Business book series (BRIEFSBUSINESS)

This book, in contrast with previous research and popular discussions that focus on the productivity of workers, identifies the critical influence of supervisors and engineers as key drivers of productivity differentials. To do so, it analyzes productivity at a Japanese car component plant and its three offshoot plants located in the United States, Thailand, and China and how productivity evolved at these plants from the mid-1990s to the early 2010s. The author’s participatory observation approach reveals that productivity and work practices converged to a limited degree over the years at all four plants.

Particularly influential are the persistent differences at these plants in the extent to which workers learn how to combine and integrate their production skills with troubleshooting skills. Supervisors play a key role in developing this integration in Japan, while worker skills remain separated in the other countries. Integrated skill development is promoted in Japan through the trusting relationships that first-line supervisors enjoy with their workforce. In the plants abroad, in contrast, the persistence of workers’ control over their individual skill development and careers impedes the development of integrated skills. Manufacturing engineers at the Japanese mother plant also play key linking roles, thereby enhancing communications and problem-solving on the shop floor, whereas manufacturing engineers at the US, Thai, and Chinese plants play more limited and compartmentalized roles. As a result, productivity remains high in Japan and lags in the other plants. Surprisingly, Japanese managers remain reluctant to introduce these more productive work practices in the offshoot plants.