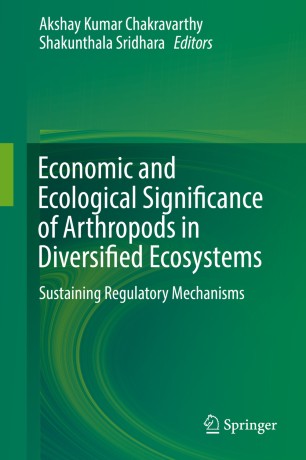 Economic and Ecological Significance of Arthropods in Diversified Ecosystems

Arthropods are invertebrates that constitute over 90% of the animal kingdom, and their bio-ecology is closely linked with global functioning and survival.

Arthropods play an important role in maintaining the health of ecosystems, provide livelihoods and nutrition to human communities, and are important indicators of environmental change. Yet the population trends of several arthropods species show them to be in decline. Arthropods constitute a dominant group with 1.2 million species influencing earth’s biodiversity. Among arthropods, insects are predominant, with ca. 1 million species and having evolved some 350 million years ago. Arthropods are closely associated with living and non-living entities alike, making the ecosystem services they provide crucially important. In order to be effective, plans for the conservation of arthropods and ecosystems should include a mixture of strategies like protecting key habitats and genomic studies to formulate relevant policies for in situ and ex situ conservation.

This two-volume book focuses on capturing the essentials of arthropod inventories, biology, and conservation. Further, it seeks to identify the mechanisms by which arthropod populations can be sustained in terrestrial and aquatic ecosystems, and by means of which certain problematic species be managed without producing harmful environmental side-effects.

This edited compilation includes chapters contributed by over 80 biologists on a wide range of topics embracing the diversity, distribution, utility and conservation of arthropods and select groups of insect taxa. More importantly, it describes in detail the mechanisms of sustaining arthropod ecosystems, services and populations. It addresses the contribution of modern biological tools such as molecular and genetic techniques regulating gene expression, as well as conventional, indigenous practices in arthropod conservation. The contributors reiterate the importance of documenting and understanding the biology of arthropods from a holistic perspective before addressing conservation issues at large. This book offers a valuable resource for all zoologists, entomologists, ecologists, conservation biologists, policy makers, teachers and students interested in the conservation of biological resources.

Dr. A.K.Chakravarthy, Head, Principal Scientist, Division of Entomology and Nematology is an author of many books and over 300 scientific papers and 25 chapters in Entomology and natural history. His interest includes Insects, birds, bats, rodents and mammals. With over three decades of experience of teaching, research and extension. Dr. Chakravarthy has been the investigator for over 30 research projects and has guided more than 20 students for post graduation. A PhD, from Punjab Agriculture University and Fellow from IARI, New Delhi, he is a member of several National and International scientific academia, an advisor, a panelist, a referee, reviewer, editor and he is associated with publication of several national and international journals worldwide. A field orientated, widely travelled biologist, he is actively working on novel approaches in Integrated Pest management, Host Plant Interaction, vertebrate pest management, Biodiversity and environmental conservation issues. Recently he has published a book entitled “New Horizons in Insect Science: Towards Sustainable Pest Management” with springer, the book will ready by January, 2015.

Professor Shakunthala Sridhara obtained her B.Sc (1967)., M.Sc. (1969) and Ph.D.(1973) from Bangalore University, Bangalore. In late 1973 she joined the University of Agricultural Sciences, Bangalore. From 1973 to 2007 she taught and carried out research on plant protection. After retiring as Professor and Head, Dr. Sridhara was selected as Emeritus Scientist of Indian Council of Agricultural research, New Delhi for a period of two years. (May 2007 to April 2009). Currently she is a consultant to pesticide companies and is also busy writing scientific books for reputed national and international publishers.

During her 38 years of research, Dr. Sridhara has published 132 research papers, participated and presented 87 research papers in national and international conferences in United Kingdom, USA, Austria, Germany, Spain and Hawai. So far she has published ten books on pest management in agricultural systems including arthropods.

“It chiefly covers the status, function, importance and control of insects and other Arthropods in agricultural systems. … there is clearly a huge amount of valuable and interesting information in this book, which is an important reference work. I thoroughly enjoyed reading it. … there are a number of colour plates of Arthropods and their habitats.” (Tom Brereton, Journal of Insect Conservation, Vol. 21, 2017)
Buy options