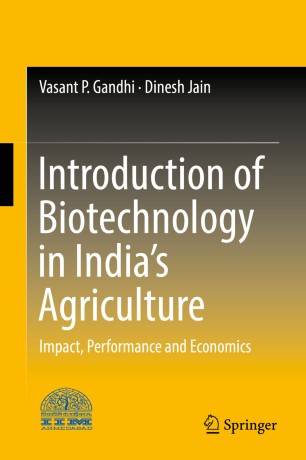 Introduction of Biotechnology in India’s Agriculture

Biotechnology can bring major breakthroughs in agriculture. The book examines the experience of introduction of biotechnology in Indian agriculture, specifically, examining the performance of Bt cotton versus non-Bt cotton across India’s major cotton states, namely Andhra Pradesh, Gujarat, Maharashtra and Tamil Nadu, which together account for nearly 70 percent of the country’s cotton production. Major advances in biotechnology have made it possible to directly identify genes, determine their functions, and transfer them from one organism to another. The advances have spawned many technologies and Bt cotton is one important outcome. Bt cotton has become one of the most widely cultivated transgenic crops and is currently grown in 21 countries - 11 developing and 10 industrialized countries. The Government of India was relatively late in permitting biotechnology, only approving the cultivation of three transgenic Bt cotton hybrids from April 2002. Many concerns were raised about their performance there was strong opposition from some quarters. In India, Gujarat and Maharastra were the first states to adopt them, followed by Andhra Pradesh, Karnataka, Tamil Nadu and Madhya Pradesh. Based on a sample of 694 farming households, the book examines and analyzes the performance on the yields, pesticide costs, seed costs, overall production costs and profits. It also reports on the environmental impacts, satisfaction with the technology and ways of improving its performance.

Vasant P. Gandhi is a Professor at the Indian Institute of Management, Ahmedabad (IIMA) in India, and is currently the NABARD Chair Professor. He did his Ph.D. from Stanford University, Masters in Management from IIMA and Bachelors in Agriculture from Pantnagar. He is the Chairman of IIMA’s Centre for Management in Agriculture (CMA). He has worked with the World Bank, and the International Food Policy Research Institute (IFPRI) in Washington, and has been a Visiting Professor at the University of Sydney and the James Cook University, Australia. He has been consultant/ Advisor to FAO, the World Bank, Government of India, various state governments, Agriculture Insurance Company of India, and McKinsey & Company, various high level government committees, and is on several company Boards. His areas of research in which he has published extensively include international food and agriculture policy, technology for agricultural growth, water resource management and institutions, agricultural markets and agribusiness.

Dinesh Jain did his doctorate from Indian Institute of Management, Ahmedabad (IIMA) and is associated with the Entrepreneurship Development Institute of India (EDI) as Associate Faculty. He did the doctoral Fellow Programme in Management (FPM) with specialisation Agribusiness from IIMA, and prior to this, Masters in Business Administration (Agribusiness Management) and Bachelors of in Agricultural Engineering.  At EDI, he is the Programme Coordinator for EDI’s Post Graduate Diploma in Management-Development Studies. He has done extensive research through projects of Australian Centre for International Agriculture Research (ACIAR), International Food Policy Research Institute (IFPRI), Global Development Network (GDN), and Ministry of Agriculture-Govt. of India. His areas of research include institutional innovations and design especially in water management, agri-entrepreneurship, new technology adoption in agriculture, food security, and impact assessment of development initiatives.