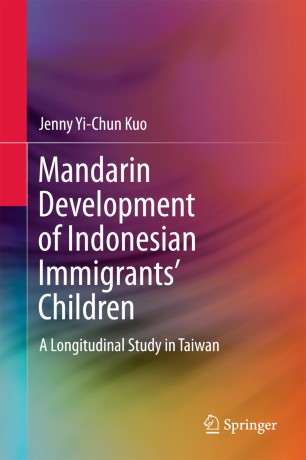 A Longitudinal Study in Taiwan

This book summarizes the results a three-year longitudinal project on Mandarin development among children of Indonesian mothers, the second largest non-Mandarin speaking immigrant group in Taiwan. These children were acquiring their first language while interacting primarily with a non-native learner of the language. The book discusses phonological, lexical and syntactic development to provide a better understanding of the language development of the children of immigrants and has important implications for language education policy and language acquisition theories.

Jenny Yichun Kuo is faculty member in the Department of Foreign Languages at the National Chiayi University. She received a PhD in linguistics from the University of Minnesota in 2003.  Her research interests include first and second language acquisition, language and cognition. She has been undertaking research on the children of immigrants in Taiwan for 12 years. Below are two examples of  her related publications.
Kuo, Jenny Yichun. (2008). Mandarin Acquisition by Children of Vietnamese Mothers in Taiwan. Taipei: Crane. ISBN 978-986-147-282-9.
Kuo, Jenny Yichun (2015). Lexical Development by Children of Thai Immigrants in Taiwan. Studies in English Language and Literature, 35, 241-252.