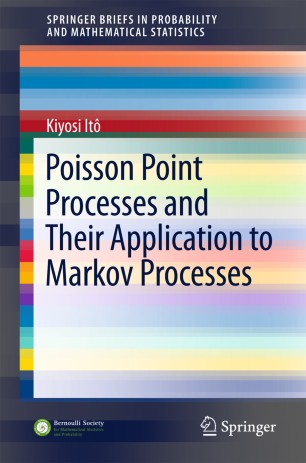 Poisson Point Processes and Their Application to Markov Processes

An extension problem (often called a boundary problem) of Markov processes has been studied, particularly in the case of one-dimensional diffusion processes, by W. Feller, K. Itô, and H. P. McKean, among others. In this book, Itô discussed a case of a general Markov process with state space S and a specified point a ∈ S called a boundary. The problem is to obtain all possible recurrent extensions of a given minimal process (i.e., the process on S \ {a} which is absorbed on reaching the boundary a). The study in this lecture is restricted to a simpler case of the boundary a being a discontinuous entrance point, leaving a more general case of a continuous entrance point to future works. He established a one-to-one correspondence between a recurrent extension and a pair of a positive measure k(db) on S \ {a} (called the jumping-in measure and a non-negative number m< (called the stagnancy rate). The necessary and sufficient conditions for a pair k, m was obtained so that the correspondence is precisely described. For this, Itô used,  as a fundamental tool, the notion of Poisson point processes formed of all excursions of  the process on S \ {a}. This theory of Itô's of Poisson point processes of excursions is indeed a breakthrough. It has been expanded and applied to more general extension problems by many succeeding researchers. Thus we may say that this lecture note by Itô is really a memorial work in the extension problems of Markov processes. Especially in Chapter 1 of this note, a general theory of Poisson point processes is given that reminds us of Itô's beautiful and impressive lectures in his day.