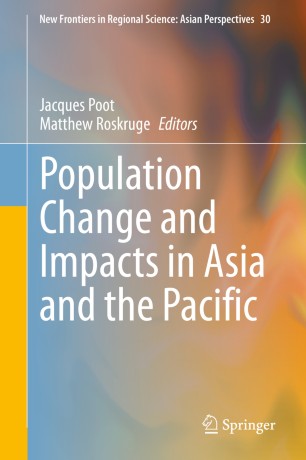 Population Change and Impacts in Asia and the Pacific

This volume brings together a range of contributions that provide contemporary regional science perspectives on population change and its socio-economic consequences in the Asia-Pacific region. This region accounts for close to two-thirds of the world’s population and is highly diverse in terms of key demographic indicators such as population size, growth, composition and distribution. The authors provide quantitative assessments, either descriptively or by means of modelling, of important demographic issues affecting this part of the world.
The topics addressed include: broad demographic trends across the Asia-Pacific region and its sub-regions; assessment of population decline, urbanization and spatial distribution using cases from China, Colombia, Japan and Australia; migration and economic impacts in Australasia, Chile and Timor Leste; and the impacts of declining or low fertility and population ageing in China, India, Thailand, and across Asia.
Given its scope, the book will appeal to all readers seeking to understand population change and impacts across the Asia-Pacific region, with a specific focus on sub-regional differences and dynamics.

Jacques Poot is the Emeritus Professor of Population Economics at the National Institute of Demographic and Economic Analysis (NIDEA), University of Waikato, New Zealand; and a Visiting Professor at the Department of Spatial Economics at the Vrije Universiteit Amsterdam, the Netherlands. His research interests include all aspects of the economics of population (such as migration, fertility, labour force, and ageing). Over the last two decades he has led several large-scale multi-institution research programmes in New Zealand and Europe on population diversity, migration impact assessment, immigrant integration, and regional population change and its socio-economic consequences.
Matthew Roskruge (Te Ātiawa, Ngāti Tama) is a senior lecturer in economics at Massey University and co-director of Te Au Rangahau Māori business research centre. Dr Roskruge specialises in applied econometrics, mixed-methods and kaupapa Māori research with a passion for social capital, population economics, public economics and the Māori economy. His research is supported by a Rutherford Discovery Fellowship alongside grants from the Ministry of Business, Innovation and Employment, Health Research Council and Ngā Pae o te Māramatanga, with whom he is collaborating to invigorate Māori economics and inspire new Māori economists.