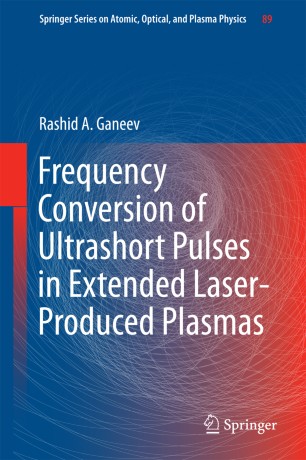 This book offers a review of the use of extended ablation plasmas as nonlinear media for HHG of high-order harmonic generation (HHG).  The book describes the different experimental approaches, shows the advantages and limitations regarding HHG efficiency and discusses the particular processes that take place at longer interaction lengths, including propagation and quasi-phase matching effects.  It describes the most recent approaches to harmonic generation in the extreme ultraviolet (XUV) range with the use of extended plasma plumes, and how these differ from more commonly-used gas-jet sources. The main focus is on studies using extended plasmas, but some new findings from HHG experiments in narrow plasma plumes are also discussed. It also describes how quasi-phase-matching in modulated plasmas, as demonstrated in recent studies, has revealed different means of tuning enhanced harmonic groups in the XUV region.

After an introduction to the fundamental theoretical and experimental aspects of HHG, a review of the most important results of HHG in narrow plasmas is presented, including recent studies of small-sized plasma plumes as emitters of high-order harmonics. In Chapter 2, various findings in the application of extended plasmas for harmonic generation are analyzed. One of the most important applications of extended plasmas, the quasi-phase-matching of generated harmonics, is demonstrated in Chapter 3, including various approaches to the modification of perforated plasma plumes. Chapter 4 depicts the nonlinear optical features of extended plasmas produced on the surfaces of different non-metal materials.  Chapter 5 is dedicated to the analysis of new opportunities for extended plasma induced HHG. The advantages of the application of long plasma plumes for HHG, such as resonance enhancement and double-pulse method, are discussed in Chapter 6. Finally, a summary section brings together all of these findings and discuss the perspectives of extended plasma formations for efficient HHG and nonlinear optical plasma spectroscopy.

The book will be useful for students and scholars working in this highly multidisciplinary domain involving material science, nonlinear optics and laser spectroscopy. It brings the new researcher to the very frontier of the physics of the interaction between laser and extended plasma; for the expert it will serve as an essential guide and indicate directions for future research.