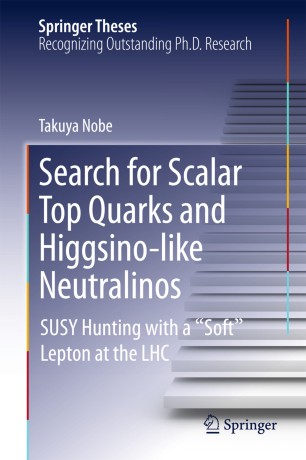 SUSY Hunting With a “Soft” Lepton at the LHC

This book reports a search for theoretically natural supersymmetry (SUSY) at the Large Hadron Collider (LHC). The data collected with the ATLAS detector in 2012 corresponding to 20 /fb of an integrated luminosity have been analyzed for stop pair production in proton–proton collisions at a center-of-mass energy of 8 TeV at the Large Hadron Collider (LHC) in the scenario of the higgsino-like neutralino.

The author focuses on stop decaying into a bottom quark and chargino. In the scenario of the higgsino-like neutralino, the mass difference between charginos and neutralinos (Δm) is expected to be small, and observable final-state particles are likely to have low-momentum (soft). The autho

r develops a dedicated analysis with a soft lepton as a probe of particles from chargino decay, which suppresses the large amount of backgrounds. As a result of the analysis, no significant SUSY signal is observed. The 95% confidence-level exclusion limits are set to masses of stop and neutralino assuming Δm = 20 GeV. The region with ΔM (the mass difference between stop and neutralino) < 70 GeV is excluded for the first time at stop mass of less than 210 GeV. The author also excludes the signals with ΔM > 120 GeV up to 600 GeV of stop mass with neutralino mass of less than 280 GeV. The author clearly shows very few remaining parameter spaces for light stop (e.g., topology of stop decay is extremely similar to the SM top quark) by combining his results and previous ATLAS analyses. His results provide a strong constraint to searches for new physics in the future.