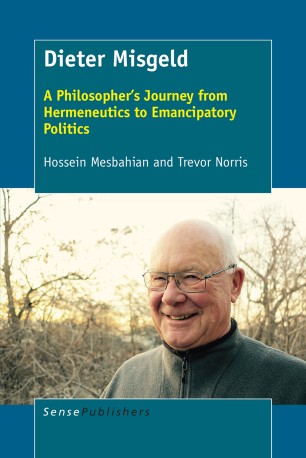 A Philosopher’s Journey from Hermeneutics to Emancipatory Politics

Professor Dieter Misgeld taught Philosophy of Education at the University of Toronto for over 30 years. His retirement lent occasion for a series of lengthy interviews, ranging from his years in Heidelberg where he studied philosophy in its history, based on philosophical hermeneutics with Gadamer, participated in debates about Hegel with Heidegger, and saw Habermas begin his career; to his interest in Richard Rorty, encounter with Buddhism, and reflections on global politics and the new security regime. With Dieter Misgeld we see the seductions of philosophy when studied among this centuries’ greatest practitioners. What emerges in the book is a pedagogy of hope based on Misgeld’s own utopian aspirations, emancipatory politics, and caution about philosophy – Misgeld argues that philosophy is no longer helpful for any project of social and political change, that the problems of the world today are political rather than philosophical. Thus, it is political engagement rather than philosophical reflection that is called for. Considering the stature of his teachers and the depth of his own philosophical capabilities, his insistence on the limitations of philosophy compels us to reflect on our own assumptions about the promise of philosophy. What emerges is the grounding of thought in the personal character of philosophical reflection, and the drama of ideas as they unfold throughout a lifetime.