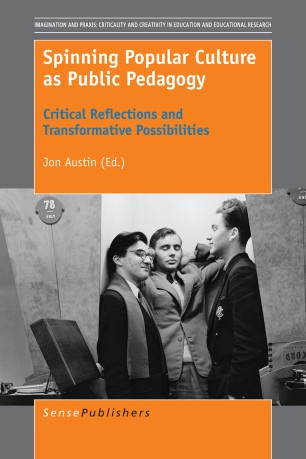 Part of the Imagination and Praxis: Criticality and Creativity in Education and Educational Research book series (IPCC)

"Spinning Popular Culture is a book about the effervescent activity lying (perhaps dormant) beneath the surface of seemingly inert and mundane cultural items in everyday life. It is a book about the power of the Everyday to maintain loyalty to or, at the very least, an unthinking acceptance of particular ways of being in the world. It is also about the capacity of such seemingly mundane artefacts to provoke resistance to this, and to enliven the visioning of social alternatives. It is a book about individual critical analyses of album cover art.
Following a brief history of the development of the aesthetics of the packaging of recorded music, eleven internationally recognised critical scholars each interrogate the cover of a particular vinyl record album they grew up with or with which they have some personal experience or resonance. The totality of the cultural artefact that is the vinyl record album is, essentially, dissected and considered from perspectives of paratextuality and pedagogy.
In this book, the contributors make the connections of everyday life to memory and history by locating the album in their personal biographies. They then look to the artwork on the album cover to explore the pedagogical possibilities they see resident there. The individual chapters, each in very different ways, provide examples of the exposure of such broad public pedagogies in practice, through critiquing the artwork from both reproductive and resistance positions.
Hopefully, readers will be encouraged to look more consciously at the Everyday – the mundane and the taken-for-granted – in their own lives with a view to becoming more critically aware of the messages circulating, unnoticed, through popular culture. Spinning Popular Culture might also encourage the reader to pull out that box of old vinyl records sitting in the back of a storage cupboard somewhere and revisit and rethink their histories. Or maybe, to just find a turntable somewhere and play them one more time!"