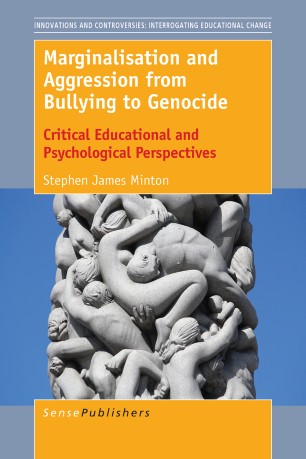 Marginalisation and Aggression from Bullying to Genocide

In this book, the author proposes the existence of a continuum of aggressive marginalisation phenomena, ranging from the unfortunately commonplace experiences of prejudice, discrimination and bullying behaviour, through to genocide. Attempts made by researchers and practitioners to understand, counter and prevent bullying behaviour are reviewed. A key finding has been that the success that has been accrued has been limited, especially when the case of those who belong to so-called ‘minority’ groups (who are often the target of prejudice outside of the school gates) is considered; it is suggested that future anti-bullying actions should meaningfully engage with prejudice as an underlying factor. After a critical consideration of the various psychological understandings of aggression, aggressive behaviour and marginalisation has been made, the author goes on to introduce and assess an eight-stage model of physical genocide, based primarily on insights from social cognitive psychology, and exemplified in the history of the Lakota-Cheyenne Campaign (1864–1890). This is followed by a consideration of the cultural genocide levelled against indigenous peoples (exemplified in the Sami people in Norway, and indigenous peoples of North America), as implemented through the actions of educational systems and educators. The book ends with some suggestions being made regarding our potential to address the ‘One’ and ‘Other’ mindset that is proposed as underlying the continuum of aggressive marginalisation phenomena – through the psychological understandings that we can offer, the educational practice that we can provide, and in the conscious acts of the affirmation of humanity we can make in our individual and collective choices.
Stephen James Minton is a lecturer in the psychology of education at the School of Education, Trinity College Dublin, Ireland. He has extensive experience in the fields of anti-bullying research and practice, and is interested in the histories and psychosocial situations, and especially the educational experiences, of marginalised people and groups.