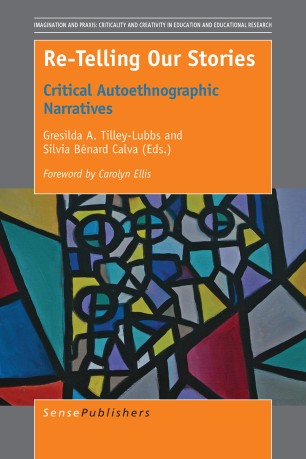 Part of the Imagination and Praxis book series (IPCC)

This book presents the collaborative work of two professors, one in Mexico and the other in the United States, and their respective students, participants in a Ph.D. course called “Critical Autoethnography.” The chapters emerged from virtual conversations as doctoral students and professors examined the intersections between critical pedagogy and autoethnography. They problematized the cultural and theoretical intersections between the participants in both countries, questioning whether their differences were causes or results of power and privilege. They used dialogue as inquiry to interrogate the theoretical perspectives that framed their prior experiences. They realized that these perspectives reflected their cultures, and that although they often intersected, they diverged at times. The fluidity of the learning experience shaped the chapters that form the book sections, including the theory and the praxis, or exemplars, of performing critical autoethnography. Each author explores personal experiences or events through the lens of critical pedagogy, underscoring the problematization of the cultural and societal context that shaped their actions, in particular as they performed in racial, ethnic, and religious settings that reflected power and privilege. The two professors served as editors and authors, as they engaged in constant iterative peer review and dialogue. Both the Mexican and the United States perspectives are reflected throughout the book, and it is this global perspective that separates this book from others that deal with similar topics.