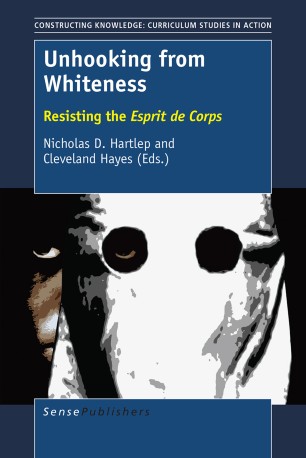 "What happens to people when they choose to unhook from the rules and modes of thought whiteness requires and expects of them?
Whiteness promotes a form of hegemonic thinking, which influences not only thought processes but also behavior within the academy. Working to dismantle the racism and whiteness that continue to keep oppressed people powerless and immobilized in academe requires sharing power, opportunity, and access. Removing barriers to the knowledge created in higher education is an essential part of this process. The process of unhooking oneself from institutionalized whiteness certainly requires fighting hegemonic modes of thought and patriarchal views that persistently keep marginalized groups of academics in their station (or at their institution). In the explosive Unhooking from Whiteness: Resisting the Esprit de Corps, editors Hartlep and Hayes continue the conversation they began in 2013; they and the chapter contributors are brave enough to tell a contemporary reality few are brave enough to discuss.
“In this groundbreaking and revolutionary sequel volume to Unhooking from Whiteness: The Key to Dismantling Racism in the United States, Nicholas Hartlep and Cleveland Hayes and a group of fearless scholars-activists continue to manifest liberative counternarratives, counteraccounts, personal memoirs, poetry, and testimonios of ‘humanity destroying crimes’ of racism, white supremacy, and ‘academic lynching’ that pervade the academic psyche through epistemology, ontology, and axiology in the United States. This radical work poses a troubling challenge to humanity not only to unhook from, but also to contest, transgress, and liberate from, white supremacy to cultivate extraordinary human potential in a trembling and unjust world.” – Ming Fang He, Georgia Southern University
Nicholas D. Hartlep is an award-winning Assistant Professor of Educational Foundations at Illinois State University and co-editor of Unhooking from Whiteness: The Key to Dismantling Racism in the United States and Critical Storytelling in Uncritical Times: Stories Disclosed in a Cultural Foundations of Education Course. He lives and writes in Normal, Illinois.
www.nicholashartlep.com
Cleveland Hayes is an Associate Professor in the College of Education and Organizational Leadership at the University of La Verne. Dr. Hayes teaches Secondary and Elementary Science Methods in the Teacher Education program and Research Methods in the Education Management and Leadership Program. He lives and writes in Upland, California."