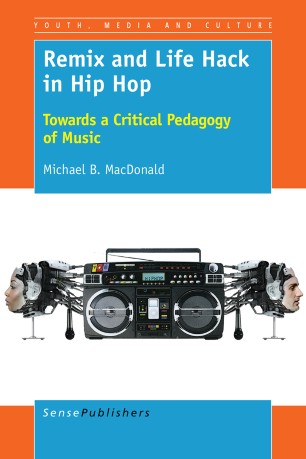 Towards a Critical Pedagogy of Music

Many hiphoppas labour to sustain Hiphop Kulture in their communities far from the big stages, world tours, and hit singles enjoyed by a shockingly few American hiphoppas. The creative labour of these few mega stars is calculated in billions of dollars. But for most hiphoppas, their creative labour may never get expressed in economic terms. Instead it is expressed in social capital, the production of collective and individual subjectivities, the bonds of love that build and hold communities together, and the healing of broken hearts, broken homes, and broken neighborhoods in broken cities. Hiphop Kulture is NOT a music genre, it is MUCH more, and exploring how the sharing of aesthetic resources builds community, and how situated learning plays a necessary role in cultural sustainability draws out questions that may lead to a model of community located cultural education, and a starting point for a critical pedagogy of music.

“I ain’t going to front, academics talking about hiphop scares me and often pisses me off. I’m protective about this culture like it’s my own baby because it’s meant so much to me and my close friends. In my less angry moments I do appreciate the fact that this culture still has so much to give to the rest of the world and that the next level is what we give back. Well, we need allies in this complex world to move things forward. As I’ve gotten to know Michael I consider him such an Ally and that his intent is firmly squared in empowering cats in the front lines. I also really dig the fact that he is committed to helping document the histories of those who laid the groundwork in the Edmonton scene. This is the respectful place to start.  I look forward to bearing witness to Grass roots Hiphop reclaiming its voice and being at the forefront with academics supporting their community efforts.” – Stephen “Buddha” Leafloor, Founder of the Canadian Floor Masters, Founder of Blueprintforlife.ca, Ashoka Fellow, Social Worker and an aging bboy!

“Dr. Michael B. MacDonald’s research into Hip Hop’s pedagogical ingenuity have not only led us to the grassroots of Hip Hop’s rich and vibrant global culture, but to the very Ethos of Hiphop. With bold examination, this exciting research stands at the forefront of contemporary post colonial Hiphop literature.” – Andre Hamilton aka Dre Pharoh, Executive Director Cipher5 Hiphop Academy, Temple of HipHop Canada