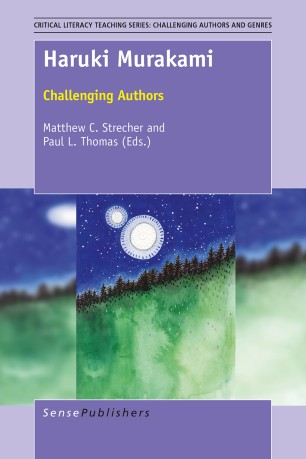 Japanese writer Haruki Murakami has achieved incredible popularity in his native country and world-wide as well as rising critical acclaim. Murakami, in addition to receiving most of the major literary awards in Japan, has been nominated several times for the Nobel Prize. Yet, his relationship with the Japanese literary community proper (known as the Bundan) has not been a particularly friendly one.
One of Murakami’s central and enduring themes is a persistent warning not to suppress our fundamental desires in favor of the demands of society at large. Murakami’s writing over his career reveals numerous recurring motifs, but his message has also evolved, creating a catalogue of works that reveals Murakami to be a challenging author. Many of those challenges lie in Murakami’s blurring of genre as well as his rich blending of Japanese and Western mythologies and styles—all while continuing to offer narratives that attract and captivate a wide range of readers. Murakami is, as Ōe Kenzaburō once contended, not a “Japanese writer” so much as a global one, and as such, he merits a central place in the classroom in order to confront readers and students, but to be challenged as well.
Reading, teaching, and studying Murakami serves well the goal of rethinking this world.  It will open new lines of inquiry into what constitutes national literatures, and how some authors, in the era of blurred national and cultural boundaries, seek now to transcend those boundaries and pursue a truly global mode of expression.