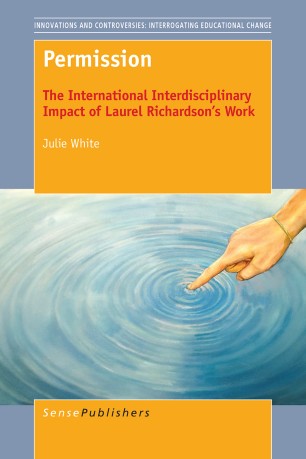 The impetus for this book was a public lecture Laurel Richardson gave in Melbourne in 2006. How and why Laurel Richardson’s writing resonates with so many others led to a qualitative research project investigating the impact of her work. This book is the outcome of that project. The nature of that connection between Richardson’s writing and her readers has been examined. Connections have also been drawn between Laurel Richardson’s writing and the importance of collaboration, community, inclusion, feminist engagement, social justice and the challenges involved in working in the modernised university. This book shows how Laurel Richardson’s groundbreaking work has influenced others and became not only a method of inquiry but also a method of empathy and imagination.
Permission chronicles and celebrates the pioneering work and influence of Laurel Richardson.  With contributions from over 50 scholars across the disciplines, beautifully curated by Julie White, Permission shows the wide reach of Richardson’s work. Richardson has blazed new trails in the academy by writing honestly, creatively and passionately about things that matter. In doing so, she has opened a space for others to find their voices and carve their own paths.  This book shows how grateful we are for the permission she has provided. A must-read for those new to Richardson’s work as well as her many fans worldwide.” – Patricia Leavy, Ph.D., creator and editor of the Social Fictions series